Around the world, there is a saying ‘evil eye’ that has been a big part of many cultures. People with a strong belief in the superstitious and magical world know about the evil eye story and take it very seriously. The evil eye is precisely what it sounds like. The evil eye is a look in someone’s eye that is a malicious, evil glare that is both seen as a curse or jinx and a wish of bad luck upon a particular individual. Often, when the evil glare is manifested on someone, the person receiving the glare will become hurt or cursed in some way or the other, most the time ending in harm to the other person. 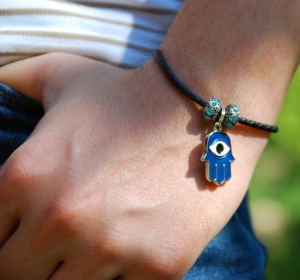 The curse with the evil eye is most popular in Asia, Central and South America, Africa, the Mediterranean, and the northern, Celtic, parts of Europe. The idea of the evil eye then stretches to America by the European and Asian colonists and immigrants. In Islam, this curse is mentioned quite often. So frequently that they even formed a shield or protection against the evil eye curse. In every culture that the evil curse is mentioned, people use amulets and talismans as a counter defense against it. These are objects that have been blessed and have magical power within them that wards off Evil and harmful spirits. Not only do they defend you against these entities, but they bring good luck to the people that have these objects in their possession.

Even though the evil eye is a look coming from a person to another, it is very popular as a tattoo. You can get angry, cruel eyes or only one eye tattooed somewhere on the body, so whoever is looking at receiving the feeling of being looked through and cursed. Below are some ideas of these tattoo designs.

The ancient history of the evil eye originates from the parts of the world where the color of people’s eyes is mainly a darker or brown tone. There is a small number of people with light-colored eyes, such as green or blue eyes, in these parts, and they are said to bestow this curse within them. This is why amulets in countries like Greece and Turkey started to have objects with a blue eye. This object serves as a counter-attack to the evil eye itself. If you curse someone and the amulet is unharmed, everything is reflected in the evil eye.

The evil eye tattoo can be designed in different ways. The cultures that believe in this curse do not have a specific pattern or symbol for the eyes, for they can come in so many different shapes and sizes. The thing that all evil eyes have in common is the aggressive, cruel, and creepy glare they give off. These tattoos can include the classical blue eye giving a disgruntled look, or you can even keep the tattoo in plain black ink. No matter what, the evil eye design is a simple, yet very thought-provoking tattoo that almost seems to look right through you.

The most effective way to ward off bad and harmful spirits and curses are through talisman and amulets. Since its first appearance, all the cultures with this superstition came up with a way to protect themselves against such an attack. People believe that the talisman should be created by the individual that plans on wearing it or keeping the object around them. This is to give the talisman more positive energy for the person who has the talisman. The amulet of choice is occasionally worn as a necklace or perhaps a piece of jewelry that can be worn by the individual at any time they can.

There are a few different ways of how the talisman can be designed. The only thing that stays the same is the round blue eye. Around the blue eye is a rounded design that serves as eyelashes and eyelids. This all-seeing blue eye is the most significant part of the amulet. As the evil eye is a light color such as green or blue, the amulet is also blue or green. People believe that the blue eye staring back into the gaze of the evil cursed eye reflects the gazer, causing a termination of the curse harming the individual.

This amulet is not only a piece of jewelry, but it can also be seen on the sides of boats, houses, buildings, and other places. This design not only protects from evil spirits, but it is a neat concept and looks nice as decoration. The Hamsa amulet is a right hand, usually painted blue, with the classic blue pupil of an eye. This is very popular as a tattoo design. It is a creative tattoo that removes all the negative energy you may come in contact with.

If you believe in the power and the potential of the evil eye and you want to protect yourself, then you are a perfect candidate for this tattoo.