During the First World War, No Man’s Land was both an actual, as well as figurative space. This place separated the front lines of the opposing armies and was probably the only location where enemy troops could meet without hostility. It was at this place that the spontaneous Christmas truce of December 1914 happened and where opposing troops might unofficially agree to safely remove their wounded comrades, or even sunbathe on the first days of spring.

The original version of this song has been published in French titled La Rose Sous Les Boulets by Leo Feist in 1918, but the most well-known English version was produced by Jack Caddigan and James Alexander Brennan at the end of the Second World War. 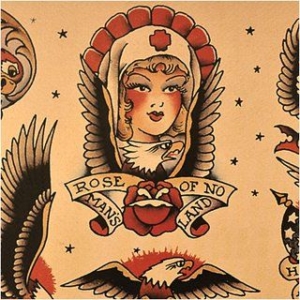 The two images of rose and angel  or “The Angel of No Man’s Land” are combined in tattoo art which was also popular during the First, as well as the Second World War. The soldiers remembered their nurses by getting tattoos which showed these compassionate women, wearing a traditional white nurse’s cap with Red Cross on it, sometimes with a rose as a backdrop. Sometimes, these nurses risked their lives to tend to the wounded man and they also offered kindness to soldiers that were far from their homes.

The motif of the Rose of No Man’s Land is unmistakable. It features an old-school style lady head wearing a cap or coif with the Red Cross as its center. In general, there is another cross serving as a background, and the face of the woman is typically nestled in the middle of a long-stemmed rose. Even though its exact meaning has been somewhat obscured by the last hundred years, the design still retains its underlying meaning as a symbol of undying appreciation for the caregivers of the world.