Firefighters are some of the courageous and self-sacrificing people. People often consider them as modern-day heroes. Firefighter tattoos are chosen by firefighters and people who seek to support or remember a firefighter who left an impact. Many firefighters get tattoos to commemorate their service and proudly identify themselves as a person of community service, similar to members of the military. 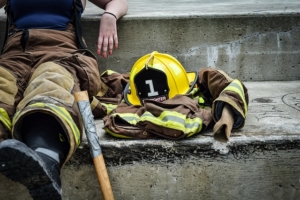 Some symbols are common for firefighters and serve as suitable designs for a firefighter. For instance, you can get a crest with the emblem of a firefighter helmet, an ax, ladder, and firehose nozzle in the center, often between two banners that read “Fire Rescue.” This one is considered a general sign. This design is often black and grey but almost always a vivid red to represent flames and heat.

Another very popular firefighter symbol is his helmet. In this design, the number of departments or fire hall is part of the helmet, specifically referencing the station where the individual worked. Flames and smoke are typically part of a larger piece to add dimension and highlight the occupation’s dangers. Some designs also include National flags to convey a sense of nationalism or pride in the country for which one is serving.

In most of the tattoo designs, there is the mask with the reflection of what that firefighter believes in or has seen. For instance, that can reflect their fellow firefighters, the American flag, and fire.

Hydrants and hoses are other symbols that are general for firefighters. When the design is smaller, they work well as traditionally rendered images. That creates a less serious, cartoonish appearance. The design replicates the traditional roots of sailor tattoos who honor their feats on the water with tattoos. Dalmatian dogs that famously escort firefighters can also be part of a firefighter image.

As mentioned above, this is a unique design with the silhouette of a firefighter shown on the mask. This is a brilliant tattoo option if you want something a bit different. It’s a frightening job that only a few will ever experience, but this tattoo is a truly great, original design. It’s both striking and beautifully powerful at the same time.

One very striking tattoo is a firefighter’s image in full gear and a gas mask, running into a burning building’s flames. These kinds of designs are much larger, like sleeves or back pieces. Almost always, these designs have a very realistic detail, taking hours of dedication from both artist and the firefighter.

The tattoo of a burning fire is a great tattoo design with a lot of detail. This design also includes flames behind it that really stand out. This is a perfect design if you want something unusual.

Breaking Down the Door

One design of this tattoo includes a firefighter breaking down the door with an ax. This design shows how much courage you need to be part of the job. This design is perfect for a sleeve design that shows strength and power. It’s extraordinary and unique for anyone that wants something cool.

Another firefighter tattoo option is the fire truck on its own. This design is perfect if you want to express yourself through a simple image. It has many details, and it’s large enough that you could put it on your arm.

To get this tattoo motif always means a good cause. This is because, with this tattoo, we praise those that put their lives in the way of danger to protect us. One very significant thing to have in mind is to find the perfect firefighter design that works for you. After all, you will wear this tattoo for the rest of your life, and you probably want to avoid regretting it.