Since the first air in 2011, there is hardly any show on TV that has earned more fans and awards than the Game of Thrones series. Not only did the show received a wild success, but at the same time, the books are some of the most popular books with more than 25 million copies sold. The creator and most well known for this book series are George RR Martin, while the TV show was produced by David Benioff and D.B. Weiss.

During the process of becoming one of the most popular series ever known among tattoo enthusiasts and fans, Game of Thrones tattoos has become popular. There is something about the old days when dragons took the sky that attracts everyone. Not only is the story amazing, but there are so many interesting logos and symbols in the show that will never leave you without options if you are interested in getting a Game of Thrones tattoo.

One of the main families in Game of Thrones is the Stark family. The show even begins following Ned Stark, who is a favorite among the fans. Ned is the King of the North, and his kingdom is known as Winterfell, which is one of the Great Houses of Westeros.

The House Stark sigil is among the favorite Game of Thrones tattoo. Their sigil is a dire wolf, painted with grey color, on a white background. This logo represents the symbol of House Stark, one of the rear houses whose motto is not a threat or boast. The motto of House Stark is, ‘Winter is Coming’ that comes from the harsh winters that are experienced in Winterfell. Another reference is to be prepared. According to this, House Stark is not only a family to be admired and respected, but they own one of the coolest sigils that you can have tattooed on the body.

Of all the unusual creatures in Game of Thrones, the White Walkers are most popular as tattoo subject. These monsters destroy everything in their way without saying a word. The symbolism behind the White Walker tattoo could be horror, mystery, or the strange things beyond that we don’t want to think about. The fact that they are cool/scary looking makes them perfect as tattoo portrait pieces.

This is a very popular subject for tattoos that are chosen by fans. The reason for that is because it is a very powerful image and is very meaningful for the show. People who haven’t watched the show could not recognize this symbol, but fans of Game of Thrones will know exactly what the image stands for.

Khaleesi or Daenerys Targaryen is the daughter of the Mad King and wife to the Khal. In the show, she is also known as the Mother of Dragons. She received the name Khaleesi by being the wife of Khal Drogo. Through the Game Of Thrones show, her mission is to reclaim the Iron Throne with the army she has assembled. A Khaleesi tattoo represents a symbol of feminine power and motherhood. 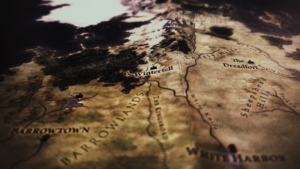 Even though there are many strong female characters in this show, Khaleesi is the most popular. Her beauty and confidence have led to a strong following both in soldiers and fans of the show. If you wish for a feminine figure to have tattooed on your body that represents strength, she is perfect for you.

Jon Snow never truly felt like one of the Starks because he is the bastard son of Ned Stark, and people often seem to remind him of that. Jon is one of the main characters in the Game Of Thrones show. He is also adored by the fans of the show. The thing that makes Jon Snow differ from the other characters is his moral compass. In the show, Jon has been tempted many times, but he never breaks, and that makes him a perfect choice for a tattoo design.