Bear has become increasingly rare but is still an undeniably beautiful animal. They live in various habitats around the world, and they are spiritually important in different cultures worldwide. In ancient mythologies, bears represented deities. Today they are still a significant symbol for a lot of people. The grizzly bear is one such type of bear, which was important for the people in the past.

There are several morphological forms that people sometimes see as subspecies. They include the mainland grizzly, Kodiak bear, peninsular grizzly, and the recently extinct California grizzly, and Mexican grizzly bear. On average, bears that are near the coast tend to be larger while the inland grizzlies are smaller. 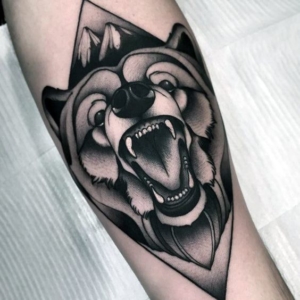 The Ussuri brown bear, which inhabits Russia, Northern China, Korea, and Japan, is sometimes called the black grizzly, even though it is a different subspecies from the bears in America.

The grizzly bear got the name grizzly because its hair is silver or pale-tipped, which gives it a grizzled effect. This bear is undoubtedly the symbol of strength. Nowadays, it is a symbol of wilderness and wildness, particularly in its native North America. However, in the past, many Native American legends included the bear as a person.

Similarly to this, Pomo Indian initiates in North California were ritually killed by a grizzly bear impersonator. Additionally to this, shamans believed that they were animal affiliates or dream helpers.

Grizzly bears are the largest terrestrial carnivores in the world. The grizzly bear is the most revered animal that Tlingit of the Pacific Northwest hunted.  People looked on the great brown grizzly bear with great regard. However, they didn’t regard it just as a dangerous antagonist, but because of its connection with men in the legendary past. The grizzly bear is fearsome and powerful.

Bear tattoos are not something new. Bears fascinated people around the world for a long time. In order to have the ability to understand the meaning of these tattoos, you should look at their meaning. You have to look at the various meanings associated with the bear in different communities and societies.

As we already mentioned, bears are a widely revered creature. They were so for millennia and all over different cultures. The most profound mention of the bear is present in the Old Testament of the Bible. Here, the bear represents the King of Persia. But, the bear was always present in some other cultures too.

As the grizzly bear is present in many cultures in the world, the meaning it stands for varies with the culture. Native American tribes, like Sioux and Pueblo Indians, give it different interpretations. The first ones believed that the bear represents hunting, battle, as well as healing. The second ones believed that the bear possesses wind powers, confusing your enemies, and the capacity to find things.

The black bear isn’t as aggressive as its cousins, but it would rather hide from danger and confront it. But, the grizzly bear is quite an aggressive one, and it finds its associations with strength and danger. The best thing you can do is choose one of the many symbols which respond to your character.

Regardless of your interpretation, the most common meanings associated with these tattoo designs are:

In addition to representing unlimited power and bravery, the grizzly bear symbolizes motherhood. This bear bear has this unique connection with nature, and it can even be the symbol of resurrection. This is because the bear awakens from its long slumber after months of inactivity during the cold winter months.

Those that have high levels of confidence and put their family first, and who survived many battles in life, use the grizzly bear tattoo on various body parts. With so many different types of bears in the world, it makes sense that these creatures have various meanings and symbolism. They can symbolize a lot of unique meanings based on different cultural elements.

The grizzly bear, together with the black bear, is a ferocious warrior, and it strikes fear into humans or animals. When talking about bear claw tattoo designs, these two beasts also share many other common attributes. They are the face of the warrior spirit, and they usually fight to the death. This is only to defend their family.

Bears live in different environments around the world, and so they have come to represent unique things to various cultures. Your bear tattoo design can be the symbol of your appreciation for nature or a spiritual connection. However, these animals are powerful symbols that make outstanding designs.

During our lifetime, we run into a lot