Dating back thousands of years ago, tattooing is still a common means of expression. Over the centuries, a lot of popular designs evolved and took on the lives of their own. However, in the process, their meaning and story got lost in time. But, there are still tattoo designs that maintain the same meaning since their existence. Some of them even carry a lot of powerful symbolism. For example, the sailors’ tattoos refer to the type of tattoos traditionally favored by the sailors. The traditions which accompany such tattoos also favor them. 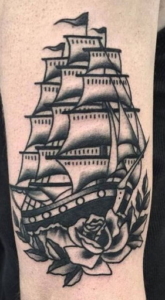 These days, tattoos are very common around the whole world. Almost every country has a long tradition of tattoos.

Nautical tattoos have a long history of popularity among the sailors, as well as other seafaring professions. Although traditionally men wear them, nowadays women also choose these tattoo designs. They can be portrayed with a lot of different elements, and also symbols. Such things may include pirates, ship wheels, swords, anchors, compasses, and stars. Even though they can be done on any scale, as a result of detail and shading, they often end up medium to large sized People don’t consider them to be mainstream designs. However, they are always popular and may represent far more than only the ocean.

When talking about nautical body art, the ship ranks as the best and most popular one. Sailors’ tattoos were one of those things which identified them and made them popular and unique. For fishermen and sailors, it represents their way of living and being. They depend on the oceans to survive and take care of their families. In some sense, tattoos of ships were the symbol of this.

A lot of cultures have long histories of tattoo art, but the European culture developed its unique style of tattooing. The tradition started in the 1700s when Captain James Cook visited the Maori of the South Pacific. Since then, inked sailors became almost a stereotype. Their tattoos were usually racy, maybe to give the sailors something to look at during long journeys.

Sailors usually incorporated religious symbols as superstitious protection from harm in order to appease the gods or avoid the wrath of Mother Nature. Some old school designs, with images such as swallows, anchors, girls in sailor hats, or dice, were connected with sailors too. One common thing for sailors was the tattoos of their vessels and tour ships.

Even though they fell out of style for a few decades, these old-school designs are enjoying a renaissance in popularity among youngsters nowadays. Here, we will talk more about the full-rigged ship tattoo.

Maritime tattoos and the full-rigged ship tattoo are found together since tattooing first entered the modern Western culture. This happened with the entering of the early sailors in the South Pacific.

A lot of maritime tattoo designs utilize a ship for different reasons. However, there is one specific reason for them for receiving a tattoo of a full-rigged ship. A sailor receives the full-rigged tattoo after he had sailed around Cape Horn. Moreover, every sailor that sailed around the Cape Horn had a small blue five-pointed star tattoo on the left ear. Five times around the Cape Horn earned one on the right ear too.

Moreover, two red marks on the forehead had another meaning. They meant that the sailor was a mighty voyager that rounded the Cape Horn for ten or more times.

The tattoo of a full-rigged ship from the age of the sail means that the sailor sailed around Cape Horn. Cape Horn is one of the most inhospitable, dangerous, and feared stretches of rough and stormy waters. This stretch of water was around the southern tip of South America. A full-rigged ship is the one which has three or more masts, square sails fully deployed.

There is maybe no tattoo design which is more associated with seamen and sailors than the one of the full-rigged ship. Most of the sailing ships which tattoo artists usually depicted in these tattoos were Clipper Ships. These tattoos were usually large, and they took the place of pride on the chest or back of the sailor. There were even smaller versions on the upper arms and shoulders.

When doing a full-rigged ship tattoo on the back or chest, it is usually framed in rope, and underneath the ship, there was also a scroll with some words. This tattoo is usually done in part out of pride, and for a way of living. However, it is also done as an amulet to make sure that the sailor is going to return home safely.

So, these are some of the meanings that tattoos of ships in general have are:

Ship tattoos may even serve as the memorial for loved ones and friends lost at sea or lost in your life. This will be an excellent way to honor someone that lived on or near the open sea too.