Even though people might not be aware of it, but most of them have an old school tattoo in their life. Very often, old school tattoos are a little bit flashy, and they also have a very classic look to them that is pleasing to look at.

The most important reason why old school tattoos are still one of the top choices is that they are pretty simple to design, but they typically pop on the skin thanks to the thick line work that is used. If you decide to visit any local tattoo shop, there are high chances that in every one of them you’ll find a book filled with these tattoo designs. Moreover, you’ll most likely end up liking at least one of them.

When it comes to the meaning of old school tattoos, they have very common meanings that most people want to attach to their designs. In most cases, these meanings that are attached aren’t extremely deep or unique, but that’s kind of the point. 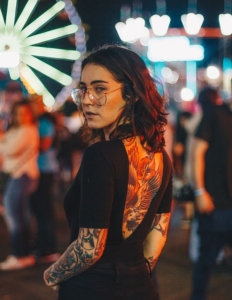 The majority of old school tattoo designs could be considered military tattoos, believe it or not. The person who is responsible for the creation of the old school look is “Sailor Jerry” Collins, and it is still around nowadays. Many sailors from all over America used to travel to Hawaii to have him create a design for them.

If you are interested in getting a military tattoo and you like that old school look, you will probably find a design that is going to capture your eye. You can get one of the Sailor Jerry classics, or you could even see if any of your local artists have come up with their spin on the style.

The old school anchor tattoo is not only classic and bold-looking but also holds some very significant meanings to the people that get them. The key meaning that people like to use is stability as the anchor is what keeps the steady boat while far out at sea.

Lots of people like to get their old school anchor tattoos due to the fact that they can fit almost anywhere on the body. They look amazing anywhere on the arm, and you can even get a large anchor on your back or your thigh.

Roses are the perfect flowers that look great when done in the old school style. This is because the bold look can give the flower a more striking look on the skin, no matter whether it is inked on its own or combined with other old school designs.

Most of the old school flower tattoos symbolize love, though it can also represent rebirth, death, and quite a few other things. If you decide to get a flower design in this style, you should look through all of the meanings attached to the one that you like before you get it. You might end up with the discovery that a flower you had never heard of has all of the meanings that you are looking for.

Since the beginning of this style, skulls have been some of the most popular old school tattoo designs. They stand for the owner’s acceptance of death for one reason or the other. For instance, people who think of themselves as adventurous are the perfect candidates for skull tattoos since it represents that they are willing to die to do what they love.

Initially, sailors got their pin-up girl tattoos only because they knew they wouldn’t see women for a while, and they wanted a sexy image to look at to get through those tough years. Nowadays, men and women get their pin-up designs for a multiplicity of reasons. Some will get them just to symbolize their sexiness, while others will get them to demonstrate their pride in feminism.

Regardless of the meaning being used, most people get classic vertical pin-up girl designs rather than horizontal. They work very well the key image in an arm sleeve, but they can also work on their own. These are also often larger tattoos because they have a bit more detail in them than most other old school tattoo designs.

Another old school design that represents adventure is the tattoo of a ship. Of course, it could also only stand for one’s love for the sea. The classic “clipper ship” is still one of the most popular old school ship tattoos out there today, and they hold the meanings previously mentioned as well as honoring Sailor Jerry because of his great ship designs.