We all know that birds are a group of animals with the ability to fly. There are around 10,000 species of birds existing on our planet today. They are present in our lives every day, being part of the nature that surrounds us. Some people even love keeping birds in their homes, often as pets.

Birds were a companion of humans throughout the history of humanity. Their symbolism comes back from the times of the first humans. These animals were an important symbol for many ancient civilizations, such as Egypt, Greece, Rome, and so on.

Many bird species symbolize some important aspects of the historically important cultures. Many beliefs have their associations with different bird species too. 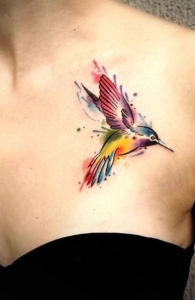 Hummingbirds are birds that are native to the Americas, and they belong to the biological family called Trochilidae. They are some of the smallest birds, most of the species measuring 7.5 – 13 cm in length. The smallest bird species is definitely a hummingbird, the 5 cm bee hummingbird weighing less than 2.0 g.

The name comes because of the humming sound that their beating wings create, flapping at high frequencies. Such frequencies are audible for human beings. They hover in midair at quite rapid wing-flapping rates.

Such rates may vary from 12 beats per second in the largest species to in excess of 80 in some of the smallest. Their highest speed exceeds 15 m/s, and some species can dive at speeds over 22 m/s.

Hummingbirds have the biggest metabolic rate of any warm-blooded animal. In order to converse energy when food is scarce, they can go into torpor, a state similar to hibernation. Then, they can slow their metabolic rate to 1/15th of its normal rate.

Most notable for its ability to seemingly hover in midair, the hummingbird is a New World animal. Its ancient symbolism, therefore, draws from the cultures that flourished there.

According to the beliefs of Aztecs, the souls of dead warriors came back to Earth as hummingbirds or butterflies. The Hopi even have a story about a hummingbird hero who saved humanity from starvation.

In tattoo art, this bird is sometimes depicted along with the colorful flowers which attract it. Just like the food they consume, there is something sweet in their diminutive size and their uncanny flying antics.

Hummingbird tattoos are mainstream tattoos for women, even though some men have them too. They can appear in many different ways and with many different elements and symbols, or colors and sizes. Because of this, they find their place everywhere on the body too.

As the hummingbird is so small, it has to work hard in order to survive. A tattoo of it can represent this difficulty and could be meaningful to a person that survived everything in life. A lot of people can associate with this. The hummingbird has become the symbol of strength it takes to rise above hardship and trouble. It represents going through hard times; however, it stands for surpassing them. It can also represent someone that lives life to the fullest and loves life with every breath.

This tattoo can also represent perseverance, liveliness, and joy. When they are in the face of death, they live life to the fullest. Generally said, this clever and beautiful bird represents life and all of its positives. This tattoo reminds us that we have to live day to day without knowing what our future holds for us.

At the same time, it tells us to stop and take a look at our past. This bird is one of the several which can fly backward, and according to some tales, it can control time. In any case, we have to be careful with the time we have and live life to the fullest.

Some of the most popular meanings of this tattoo are being playful and possessing a high amount of energy. It can also symbolize vitality, loyalty, renewal, love, and having a very playful spirit.

Additionally, to all these positive attributes, you can fill your design with a wide range of colors, which will make your tattoo unique. While many people depict their hummingbirds in their tattoo flying or sipping nectar, flowers often take part in the tattoo. This permits them to express even more of their personality.

The meaning of the hummingbird tattoo finds its basis in the spirit of this bird. However, incorporating traditional and tribal aspects become more and more popular too. Regardless of why you like this tattoo, it will be the perfect design for you to express your unique qualities. You can personalize almost everything with these tattoo designs.