When it comes to traditional Greek tattoo designs, you will need a whole history course to cover them all completely with their symbolism and meanings. However, there are some of them which are more popular than others, such as mythological creatures and gods.

Greek mythology is the body of myths originally told by the ancient Greeks. These stories concern the origin and nature of the world. They also cover the activities and lives of heroes, deities, and mythological creatures. They even show the significance of the cult and ritual practices of the Greeks.

Modern scholars study the myths trying to shed some light on the religious or also political institutions of ancient Greece. They also try to shed light on its civilization and to gain an understanding of the nature of myth-making itself.

Greek mythology has had a huge influence on the culture, literature, and arts of Western civilizations. It is still part of Western heritage and language. Artists and poets from ancient times until now derived inspiration from Greek mythology. In that way, they discovered contemporary importance and relevance in the themes.

Nowadays, we know about Greek mythology primarily from Greek literature and representations on visual media. This literature dates from the Geometric period, from c. 900 BC, to c. 800 BC onward. Archaeological and literary sources integrate, sometimes mutually supportive, and sometimes conflict. But, in various cases, the existence of this corpus of data strongly indicates that various elements of Greek mythology have strong historical and factual roots. 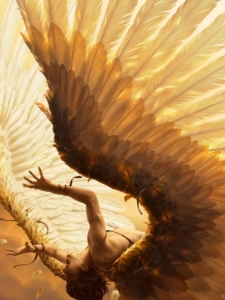 When it comes to gods, Greeks had a lot of them. They were Apollo, Poseidon, Zeus, Hades, and Hermes, among the others. With all the heroes, monsters, mortals, and other creatures, Greeks have an excellent source for inspiration for beautiful tattoo designs.

One such creature is Icarus, the symbol of uncontrolled and rush youth, which disregards parental warnings to earn its death.

In Greek mythology, Icarus is the son of the master craftsman Daedalus, who created the Labyrinth. Icarus and his father tried to run away from Crete by means of wings that the father constructed from wax and feathers.

The father of Icarus warns him first of complacency and then of hubris. He asked him not to fly too low or too high. He told him that he would prevent the dampness of the sea from clogging his wings, and the heat of the Sun to melt them. However, he ignored the instructions of his father about not flying too close to the Sun. When the wax in the wings melted, he fell into the sea where he drowned.

The father of Icarus, named Daedalus, was a very remarkable and talented Athenian craftsman. He built the Labyrinth for King Minos of Crete, near his palace at Knossos, in order to imprison the Minotaur.

The Minotaur was a half-bull, half-man monster, and he was the son of King Minos’ wife and the Cretan bull. However, Minos imprisoned Daedalus, too, as he gave his daughter a clew.  In that way, she helped Theseus, Minos’ enemy, to survive the Labyrinth and defeat the Minotaur.

Daedalus created two pairs of wings using feathers and wax for himself and his son as well. He tried his wings first, and before escaping from the island, he warned his son about how he should fly.

However, overwhelmed by the beauty that flying lent him, Icarus came too close to the Sun, and the wax melted. Icarus continued flapping the wings, but soon he realized that there were no feathers left. He fell in the sea and drowned in the area which today bears his name, the Icarian Sea near the island Icaria.

The Icarus tattoo has an excellent deal of symbolism. This story emphasized the idea the Greeks had of Sophrosyne. This means having a healthy idea of self-control and boundaries. This symbol of Icarus represents balance in life and knowledge.

The image of Icarus, or also the story’s lesson, is the symbol of the penalties of being over-ambitious. This could also translate into an idea of heeding the warning and not overdo things. Everything is good in moderation. The Icarus symbol reminds us not to overdo things and keep in mind that we can take things too far.

Similarly, the Icarus tattoo will symbolize a notice against the neglectful chase for immediate gratification. The flight he traveled on represents a lesson in the value of doing things in moderation. It is the symbol of respecting self-limits and of acting accordingly.

In various cases, the Icarus tattoo is going to show the young Icarus flying toward the Sun. He has his wings spread, and he enjoys these moments of flying fearlessly and freedom. Outside of the story, this particular moment will represent sheer wonder and joy.

The story of Icarus is a well-known story, and it has very specific imagery. If you are thinking about getting this tattoo, make sure you know what it means and represents.