There are several tattoos that can hold various meanings and still look beautifully simple. Most tattoo designs which fulfill both of these criteria are some religious symbols, such as the Star of David, and others. On the other hand, there are non-religious symbols too, which can hold various meanings and be very beautiful at the same time. One such symbol is the infinity symbol. A lot of people consider this symbol one for mathematicians. However, the infinity tattoo design is a very popular one among the general population and in its own right. 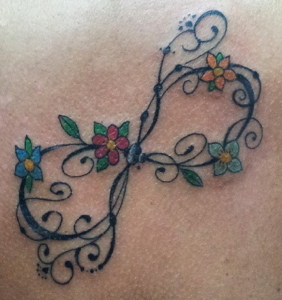 Infinity is a concept which describes something without any bound, or something larger than any natural number. Philosophers speculated about the nature of the infinite, as many paradoxes involving infinity were proposed.

Somewhere at the end of the 19th century, Georg Cantor introduced and studied infinite sets and infinite numbers. Those numbers are now an essential part of the foundation of mathematics. For instance, in modern mathematics, a line is the set of points, and their infinite number is larger than the number of integers.

The figure eight, lying on its side, is the mathematical symbol for infinity, which means something very great in number. It particularly means something unending and uncountable. It is quite similar to the ouroboros or snake that eats its tail. However, here there is a double looping and returning motion, double endlessness.

Ancient cultures had several ideas about the nature of infinity. The ancient Indians and Greeks didn’t define infinity in precise formalism as modern mathematics. Instead, they approached this subject as a philosophical concept.

The earliest recorded idea of infinity comes from a pre-Socratic Greek philosopher named Anaximander, who lived in Miletus.

For longer than the recorded history, the notion of infinity perplexed us. Infinity is a sequence that contains an infinite amount of numbers. For example, an infinity which contains positive and negative numbers is going to be twice as big as the infinity with just positive numbers.

Religion and philosophy assigned completely different and new meanings to this mathematical principle, which resonates with ordinary people. There are a number of tattoo designs for men and women that take this symbol and give it new meaning.

The meaning which stands behind the infinity symbol dates back to before written history. In those times, the symbol had the form of a circle, with one end of a serpent biting the other end. The origins of this symbol are in ancient Egypt, but it also appeared as far away as South America.

Infinity tattoo designs are popular amongst couples, and they are usually in combination with hearts or something else symbolizing love. The couples that get these tattoos get them to symbolize their never-ending and limitless love. Also, they put the tattoo in the same body part to further add meaning to this establishment.

However, these tattoo designs aren’t strictly for lovers. The infinity symbol conveys meanings of reincarnation and rebirth as in eastern cultures and religions such as Buddhism and Hinduism.

The infinity tattoo signifies that we are all eternal, whether we are in physical bodies or not. It is a very popular tattoo because there are many layers to its meaning, and is also related to concepts from different cultures.

Another symbolism that these tattoos convey is one of no limitations and never-ending possibilities. It simply signifies that there are no boundaries. Everything is infinite. The symbol represents our Universe and all the possibilities it has. It represents parallel universes and realities. With such infinite realities, possibilities, and universes, anything and everything can be possible.

This is the symbol that defines the concept of endless, infiniteness, and limitlessness. A lot of people use it to symbolize forever, and it may simply be the most commonly used symbolism. It can mean whatever we define it to mean.

The infinity tattoo designs could be simple; however, they will still look fantastic, although simple. It is also quite easy to customize, and they will look beautiful anywhere on your body.

For instance, you can also add hearts if you want to signify love, an infinite love, of course. You may also intersect two separate symbols in order to create a cross for added religious meaning. You may also intertwine the yin-yang symbol to amplify the meanings of each symbol.

Some people even choose to use the words of a quote, in order to create the infinity symbol rather than one simple looping line. Others choose to add embellishments and swirls and loops around the tattoo design to ad flare.

The possibilities when it comes to making your infinity tattoo more meaningful are endless.