Those people who traveled to Japan probably came across statues of the Seven Lucky Gods in Shinto or Buddhist shrine. Moreover, they probably saw some portrayals of these gods in the woodblock prints. People even sell them as dolls, charms, and figurines to tourists around the country. The Seven Lucky Gods come from various cultural influences. Their symbolic representations vary, leaving a lot of the visitors to Japan wondering who they are. They even think about their symbolic significance. 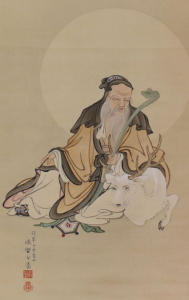 The name by which they are famous in Japan is Shichi Fukujin, which translates “The Seven Gods of Good Fortune.” Adapted from different Buddhist, Hindu, Shinto and Taoist gods and saints, they were probably grouped together in Japanese folklore somewhere around the 17th century.

According to traditions, these gods arrive aboard a treasure-laden ship on New Year’s Day. Then, they are distributing gifts of wealth and prosperity to worthy people. This ship is usually present on pochibukuro, the red envelopes in which people give money to children at New Year. If you leave a picture of the Seven Lucky Gods under your pillow on New Year’s Eve, you will enjoy a whole year of good luck.

The Seven Lucky Gods are Hotei, Jurojin, Fukurokuju, Bishamonten, Benzaiten, Daikokuten, and Ebisu. In this article, we will talk about Jurojin, his origins, and his uses in tattoo artwork.

In Japan, Jurojin is one of the Seven Gods of Good Fortune, according to Taoist beliefs. He is the God of longevity. He originates from the Chinese Taoist god, the Old Man of the South Pole. People know him as the immortal of the Northern Song dynasty, and he was probably a historical figure of that period.

People identify Jurojin as the personification of the Southern Polar Star. While statues and paintings of this god are auspicious, he never really developed a following independent of the other deities of his group.

Usually, people identify him with Fukurokuju, another of the Seven Lucky Gods. In some accounts, the two of them inhabit the same body. As such, people often confuse them. Jurojin usually walks with a staff and a fan. People depict him as an old man of slight stature, approximately 90cm. He has a long white beard and usually a very tall and bald head.

Moreover, he has a scroll tied to his staff, on which he writes the lifespan of all living things. Usually, people identify the scroll as a Buddhist sutra. The deer, which is the symbol of longevity, often accompanies him as a messenger.

Jurojin is a popular subject of Japanese ink wash paintings. The Zen Buddhist painters introduced him to the Japanese art tradition. Depictions of Jurojin span from the Muromachi period through the Edo period. Artists that depicted him as a subject are Sesshu, Sesson Shukei, Kano Tan’yu, and Maruyama Okyo. Jurojin is also constantly present in tattoo art.

Just like we already mentioned, Jurojin is one of the Seven Gods of Good Fortune in Japanese mythology. It is also a popular symbol in Japanese tattoo art. However, artists often depict him with his companions, the rest of the gods.

Jurojin is the god of longevity, represented as an ancient bearded man, sometimes confused with Fukurokuju. The confusion happens because this god also finds its association with longevity. However, it also symbolizes wisdom, and sometimes wealth.

Jurojin is mainly the god of wisdom and long life. Earlier, people regarded him as the god of wealth too. There are disputes about the contents of the scroll that he wears. Some say it contains records of all deeds, bad, and good, of every person on this planet. According to others, it contains all the wisdom of this world.

Just like we already mentioned, a deer often accompanies this Japanese god. In this case, the deer is the symbol of wisdom. A lot of people of the East believe that the older a deer gets, the wiser it becomes. The deer is quite a strong symbol of longevity and wisdom.

Unluckily, this god has a reputation as a heavy drinker and a womanizer. He simply loves a party with lots of alcohol and plenty of beautiful women. As he is a god, he has the capacity to be perfectly sober in the morning, regardless of how much he was drinking the night before.

Jurojin tattoos are popular because of the belonging of this god in the group of the Seven Lucky Gods. He carries wisdom, which is a quality that can lead human beings to more intelligence and insight. It is important to classify this god as the distinct being he is. In that way, there will be less confusion between him and Fukurokuju.

The Seven Gods of Good Fortune are a group of deities. Together, they bring loads of health, prosperity, long life, fortune, and good luck to those that recognize them. Because of all these traits, they are commonly present in Japanese tattoo designs, and they are abundant with meanings.