For centuries, Khmer tattoos or Sak Yant tattoos as they are also known to have been very popular in most parts of South East Asia. As tattoo designs, they not only look good in the skin but also hold some crucial meanings. Even though people who live in Asian countries and other heavily Buddhist areas are the ones, who wear this kind of tattoos, over the last decade, it appears that a growing number of people from the West have learned about the style and have decided to get their own Khmer tattoos.

No matter what kind of art design you choose for this tattoo, the tattoo will always have some underlying meanings. Most of the time, Khmer tattoos will symbolize protection, and you will also typically find that the owners of these tattoos believe that they have magical powers. If you decide to get this tattoo, you are not obligated at all to use these meanings. The main aspect that you should be aware of is that they are related to almost every Khmer design out there today.

One very popular Khmer tattoo is the Yant Sing Thong tattoo that includes a highly detailed lion holding a flag. This design symbolizes dominance in everything in life, which is something that plenty of people desire. There is no better Khmer tattoo to get if you want to have a lot of power in your life. 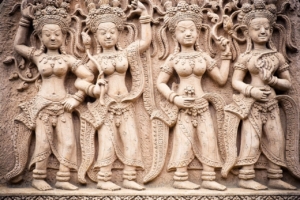 There is one design that is popular both with Hindus and with the Buddhists, and that is the Ganesh tattoo. Most often, this is a huge Khmer tattoo that incorporates an elephant sitting in a meditative position. It stands for one’s ability to overcome hard times in one’s life despite how challenging they are.

One of the best Khmer tattoos, if you are searching for a love tattoo, is the Sariga Koo Yant design. This design is not only an incredible choice for people who are trying to reveal the love they have in their lives but also quite popular for people interested in having the power to attract. You can also get this design tattooed as a lucky charm during the essential moments in your life.

If you need some focus in your already complicated life, then you might be interested in the Pra Jao Haam Tukh tattoo. This Khmer design is believed to be able to give people the ability to block out all of the unwanted noise, particularly in moments when they need to focus.

If you consider yourself as a person who loves birds that much to get them on the skin, then you will almost certainly love the Hongsa Yant design. This is a pretty classic Khmer tattoo design that people who were only recently introduced to this style choose to get. It incorporates a swan bird and is believed to give the wearer the capability to persuade everyone around them. This is a perfect Khmer tattoo if you only want a bit of a jolt when you need to induce someone of anything.

The Hanuman Yant is considered as the coolest looking Khmer tattoo, which is a rounded design that shows a soldier fighting for what is his (or hers). There is no better design to get if you want to have a Khmer tattoo that symbolizes strength and bravery. The fact that these are the meanings that most people want in a tattoo is the reason why the Hanuman Yant is growing in popularity in recent times.

If you want to improve your business because of how hardworking you are, then you may be interested in the Tong Maharat. This design of the Khmer tattoo is a design that incorporates a large flag. There is a common belief that this tattoo allows the person wearing it to foresight with their businesses, allowing them to know exactly what to do to improve it. Due to its flag-like design, the Tong Maharat looks great on the chest or shoulder.

Almost every Khmer tattoo design is made in black ink without involving any color. If you are a type of character who is more interested in a colorful tattoo, in that situation, you should probably look into other styles as the color would throw off the classic look of Khmer tattoos that could be taken as an offense, and you probably want to avoid that. However, you are free to play with these designs to fit your needs.

As already mentioned before, the majority of Khmer tattoos are quite large. However, that doesn’t mean that you can’t shrink most of them down to fit wherever you want on the skin. If you want to get the Khmer tattoo that is quite detailed, you’ll probably want to avoid shrinking down the design that is meant to have a bunch of noticeable symbols in it.