Home
Tattoo Meanings
New Moon Tattoos: How It Is Used In Tattoo Artworks?

Moon tattoos are an excellent choice of tattoo artwork for anyone that believes in higher powers and astronomy combined with mysticism. They are also great for people who simply like whimsical tattoos. 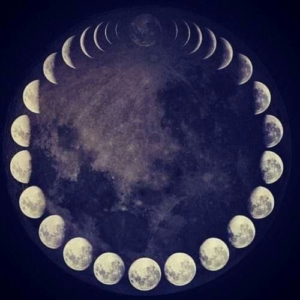 Since pre-history, human beings were fascinated by the otherworldly nature of the moon. The changes of the moon were connected to the tides and closely watched. Some cultures in the world believed that the moon held some very special powers. They also believed that God governed the moon at that time.

Depending on your tattoo design, and your personal interest, your moon tattoo can have unique meanings. Nowadays, moon tattoos are very popular among men and women. These tattoos have a connection with the feminine and astronomy.

Moreover, they have a close relationship with women, as moon tattoos are wonderful and attractive for the human eye. Moon tattoos represent birth, death, darkness, purity, and growth. The moon is a powerful mythological and feminine symbol for tattoo lovers that really like this tattoo design. It represents beauty and power. There are a lot of different tattoo designs you can choose from. Also, you have the chance to modify your moon tattoo design according to your wants and needs. You can tattoo a Full Moon or a New Moon, or you can combine the moon with other elements.

Here, we are going to talk about New Moon tattoos and their meaning and symbolism in the tattooing world.

It happens when the moon and the sun have the same ecliptic longitude. At this particular phase, the lunar disk is not visible to the unaided eye. However, it will be visible when silhouetted during a solar eclipse. Daylight outshines the earthlight that dimly illuminates the New Moon. The actual phase usually is a very thin crescent. The crescent moon is briefly visible at times when low above the western horizon shortly after sunset and right before moonset.

This happens because of the perturbing effects of the gravity of the sun on the eccentric orbit of the moon. In a lunar calendar, every month corresponds to a certain lunation. Every lunar cycle may be assigned a unique lunation number to identify it.

Moon tattoos are excellent for anyone that believes in the powers and influence of celestial powers. They are also suitable for people who have a whimsical side or appreciate the science and history of astronomy. Moons are profoundly symbolic images on their own. However, their meaning may increase when they are paired with another symbol like a wolf or sun.

Moons are also an excellent tattoo to get if you want a small and discreet tattoo. However, you can easily adapt them to fit a larger space too, either on their own or in combination.

The New Moon or Dark Moon, which lasts for three days, isn’t lit by the sun. In ancient times, the reappearance of the Crescent Moon was anxiously awaited. Sometimes, the time of the New Moon represented ascent from the dark underworld up to the light of the sky.

Light usually finds its association with honesty, goodness, and purity. Because of this, people typically consider the moon dark or evil. You can create a tattoo that represents the more sinister aspects of the moon.

You can incorporate a particularly nasty face onto a new or crescent moon, in order to build the evil imagery.

The New Moon is very important for some religions and traditions around the world. For example, it is significant in the Hindu calendar. People generally wait for the New Moon to start projecting, as its waxing period is favorable for new work. There are 15 moon dates for each of the waxing and waning periods for the Hindu people.

The Islamic calendar, on the other hand, retained an observational definition of the New Moon. They mark the new month when they see the first crescent moon, making it impossible to be certain in advance of when a specific month is going to start. The New Moon is also the beginning of the month in the Chinese calendar. Some Buddhist Chinese people keep a vegetarian diet on the New and Full Moon each month. The New Moon also signifies the start of every Jewish month. In the Hebrew calendar, people consider it an important date and minor holiday.

We can see that the New Moon has specific meanings among different cultures and religions in the world. That is why it is a common motif for beautiful tattoo designs, which correspond to different personalities.