In the Haitian Vodou religion and belief system, Papa Legba is associated with the crossroads. Because of his oratory gift, he is a being with strong influence over communication and speech. He is one of the loa, the spirits of daily life in the Vodou beliefs. In the Haitian Vodou, Legba is seen as the mediator between mortal men and the loa, or lwa. A loa is a group of deities responsible for various aspects of everyday life, and they are the children of a dominant creator, Bondye. They are separated into families, such as the Ghede and Ogou, and people develop communication with them through offerings, petitions, and prayers. On many occasions, Papa Legba is the one who carries these 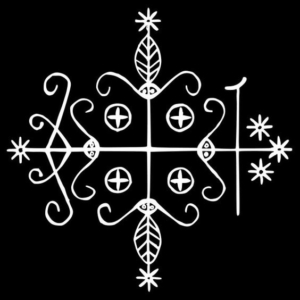 offerings to the loa.

Who is Papa Legba?

Before we know and understand who Papa Legba is, we need to understand the Haitian practice of Vodou (also referred to as Vodoun or Vodun). “Vodou” is the commonly used spelling for the religion in official Haitian Creole and among scholars in general. The once-common spelling “Voodoo” is no longer used to avoid confusion with Louisiana Voodoo, which is a related but slightly different set of religious practices and to separate the tradition from any negative connotations of the term, Voodoo, picked up over the years.

Legba is a West African and Caribbean Voodoo god. This god has many names depending on the region where he is worshipped. The most conventional known is in Haiti as Papa Legba. Papa Legba serves as the defender of the Poto Mitan–the center of support and power in the home. Also, he allows for contact between humans and the spirit world. In the West African Voodoo practices, spirits of the dead cannot inhabit the body unless endorsed by Papa Legba.

The Legba symbol usually has a red background, which is one of his representative colors. The symbol includes several keys, which symbolize Legba’s control over passage forms and communications, including locks, gates, and passageways. It also includes a cane, as Papa Legba is generally shown as a feeble old man in the Haitian religion.

The History of Papa Legba

It’s believed that he originated in the kingdom of Dahomey, now Benin; Papa Legba is one of the best-known characters in African spirituality. The practices of Vodun come from a native belief system explicitly found in West Africa. When the people of Africa were enslaved and brought to North America, they took with them many of their spirits and gods, including Legba. Slave owners were worried about potential rebellion. Therefore they separated enslaved people that came from the same area.

Combining people from different language groups and regions could use the communication barrier to discourage or even prevent revolt. However, many of the deities were similar. Hence, enslaved people from opposing parts of Africa soon established familiarities in their beliefs and practices and were forced to keep their secrets hidden.

Mythology and Worship Of Papa Legba

Legba has advanced in many ways from his origins in Africa, where he is sometimes viewed as a trickster or fertility god. He may be shown as both male and female, many sometimes with an erect phallus. In other situations, he is a protector and healer of children and can grant forgiveness for crimes against others. Variants of Legba exist in many places on earth, including Brazil, Trinidad, and Cuba. In some circumstances, Papa Legba is also known to change his form and sometimes appears in the shape of a small child. This dual form is known to emphasize his speed and clarity, but also his unpredictable behavior. In one situation, he is a resourceful deceiver, and n the other, a destiny reader. Legba is, depicted at the same time, a rebellious boy but also a clever and intelligent old man.

Papa Legba is shown in many forms in New Orleans and Haitian Voodoo. He is typically pictured as an older man, wearing a straw hat or old ripped clothing, accompanied by a dog, and walking with a cane.

Thursday is the day in the week dedicated to Legba, while dogs and roosters are considered sacred to him. Black, Yellow, purple, and red colors are special to Legba.

Papa Legba is a master communicator who speaks the languages of all humans. Then translates the requests and delivers them to the loa. Legba is a remover of barriers and can be consulted to help find new, positive ways and opportunities, thanks to his ability to open doors and new roads. Papa Legba is linked with crossroads, gateways, locks, and doorways. The primary Papa Legba symbol is the cross, which is clearly associated with the crossroads of the worlds. Vodou gods are required to use symbols called veve. Each deity has its veve, drawn at the beginning of any rituals and erased at the end. Legba’s veve features the cross and a walking stick on the right-hand side. Papa Legba is known for his vigor and for being an outstanding communicator with a skill for language. He is also a defender of children and prophets and is sometimes depicted as a warrior and a god of fertility and travel.

Papa Legba And His Magical Connections

If you have difficulties moving forward with your life (you’re stuck at the crossroads), Legba is the one to call for. He does expect any kind of payment. However, in exchange for his help and assistance, typical offerings might include chocolate and other candy, alcohol, dark rum, cigars, or pipe tobacco.

Legba, like the other loa, is characterized by a veve, a symbol that includes a number of interlocked keys and a cane. He can be hailed with proper offerings and a chant; one of the most widespread is this:

Open the gate for me, Papa Legba, that I may pass,

When I return, I will thank the loa.”

Many people who function with Legba are those who have been established into New Orleans Voodoo, Haitian Vodou, Santeria, or one of the numerous other African traditional religions. There are distinct ways of contacting Legba, many of which are initiatory traditions with protocols that worshipers must follow. By working under the guidance of a houngan or mambo, a devotee engaged in ceremonies and rituals to form an affinity with Legba and the loa. Some devoted practitioners of Hoodoo and other African traditional religions create these associations via personal passion with dedicated shrines and suitable offerings to the spirits.

Vodou was once banned, but today, it’s known as a religion in Haiti. Because of this, Papa Legba has become increasingly prevalent. As a god of fertility, crossroads, travel, and gatekeeper to the spirit world, Papa Legba plays many roles.

Papa Legba has made many interesting and exciting appearances in today’s pop culture. He shows up temporarily in Neil Gaiman’s American Gods and recreates a part in Terry Pratchett’s Witches Abroad. He is a periodic character in the hit television series American Horror Story, where he is unreliably portrayed as demanding the sacrifice of a human infant.

I’m absolutely sure that with all the things we discussed in today’s article, finding a connection between Papa Legba (and his interesting history and symbolism) and your “Legba” inspired tattoo design it’s not gonna be a problem. He has an interesting and solid story to tell. Combining this story with a tattoo design is gonna be an artistic challenge, both esthetically and technically. This particular design can be depicted in many different styles and techniques, so choosing the right artist is gonna be crucial.