As an average person, you probably don’t think about ropes on a daily basis. However, this is not the case with sailors. For the sailors in the Navy or a sailor who sets out to sea for a day of fishing, then the rope is the most useful tool you have out in the open sea. Ropes are so important not only because they are used to hold the boat close to the dock, but at the same time, they are used for a countless number of things on the boat itself. For sailors, having a rope on the dock is extremely important.

Knots are the second nature of ropes. Thousands of different knots can come from a rope.

When we talk about holding down or fastening boat’s objects for the back and forth rocking of the waves not to send them flying off the side, sailors use different kinds of knots. Ropes and knots are not only used for holding down cargo on a ship, but they are also used for many other things. The oldest and the vest way of holding the ship at dock us by using ropes. 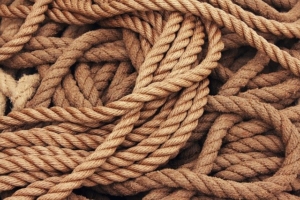 Even though ropes do not look as if they are very strong, their strength is incredible. Different knots also add to the strength of the ropes. This comes from the fact that if the knot that is tied is not strong enough, the knot will eventually break loose and either untangles itself or break apart thread by thread until it snaps.  On the other hand, a strong enough knot will prevent this from happening. This is the particular reason why sailors and fishers train hard to learn how to tie knots and use ropes. Knowing how to tie a knot out at sea properly might help you survive. This is because anything can happen in the middle of nowhere, and the rope and a good technique in tying knots might be the only way for your survival.

The symbolism behind a rope tattoo is the same as its meaning, to hold things together. Owning a rope tattoo can represent different things, and everything depends on the story; the owner has to go along with it. Most of the people who own a rope tattoo have been in the Navy as sailors or are fishermen. A rope can symbolize the significance of having things stay together and secure. The same as in real life, we can use this as a way of representing the strong bond and forever loyalty to whatever this rope may be holding close together. Although anyone can get this tattoo, in the Navy, a tattoo of rope tied around the wrist can suggest that you are a deckhand.  In other words, this means that you are the one who is in control of fastening down the cargo and gear on the ships.

There are different kinds of knots that you can use in your rope tattoo design.  Your capability to identify knots is useful, and the adding of a knot to the rope tattoo improves the creativity of the tattoo in general.

The bowline knots it one of the top choices when it comes to a rope tattoo. This is probably because it is also one of the most helpful knots you can learn to tie when on a boat. The bowline is similar to a noose. However, this noose will not slip off and run. One great thing that lots of people love about this particular knot is that no matter how tight the knot gets, it can easily be loosened and undone.

Another very practical and useful knot is a sheet bend knot that is used in everyday sailor life. This is a knot that serves to link two different ropes together as one and makes the rope even longer if needed to be. This knot is helpful when something being secured has a large and uneven diameter. As a tattoo, this is an interesting design. With this knot, you could represent the two different ropes intertwined together. One rope can have a different color from the other, so it is easier to distinguish. When this knot is wrapped around the wrist or arm, it can create a neat tattoo and almost look like a bracelet of some sort.

To have the rope attached to an anchor is another beautiful design. Through this knot, you are not only showing the bond between holding things together but also it can symbolize constancy and the ability to stand your ground. Since most rope and knot tattoos are wrapped around the wrist or arm, this design of an anchor and rope could be depicted going down the arm, leg, even the side of the chest.

No matter which rope design you decide to choose, having the knot within it is optional. Of course, without the knot, people might have difficulty understanding what your tattoo stands for. If you add a knot to a rope, that can distinguish just what it is and add more function to the object. You can also add color to these tattoos as well. Golden yellow and blue are the colors that are used most often.

Have you ever been searching for a symbol