Seals are water animals that usually live in the Northern hemisphere where the water is much colder. They are very playful water creatures that are generally seen in groups. Seals and sea lions are those playful aquatic acrobats that are so graceful in the water but also part of the time need to live on the land since they are mammals. Having sleek dark bodies, they can dart about with high speed, and they are benevolent and curious and thus of natural interest to humans. Even in ancient times, these water creatures have been known as very powerful animal 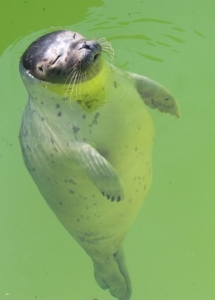 totems, and there we can find the origins of the seal tattoo.

The symbolic meaning of the seal:

As a spirit animal, the seal usually represents a symbol of imagination and creativity that might be hidden in you. If the seal is your spirit animal, you should pay more attention to your talents and allow them to guide you on your life path. Furthermore, the seal in your life may stand as a symbol of trust and integrity. There are times when it may symbolize your high expectations in life. Sometimes when obstacles appear in your life, but you may have high expectations, the seal can teach you how to lower them but at the same time work hard to reach your goals. Another thing worth mentioning is that the seal is a symbol of play and joy but, at the same time, destruction.

The seal as an animal totem:

If your animal totem is a seal, then you are creative and imaginative. Moreover, those why have the seal as their animal totem maybe artists and they need activities where they can express their creativity and imagination. It is crucial for you to listen to your inner self and discover what you actually need in life. Since your imagination is very high, you shouldn’t ignore the messages that come from your inside personality.

The seal as a totem will encourage you to swim during stressful situations and that there is always a solution to your problems. It can teach you how to listen to your inner rhythm to survive. If the seal is your totem, it means that even though sometimes there are obstacles in your life, you don’t have to fight them all the time. There are times when these obstacles can be beneficial for you and make your life more exciting. If you choose the seal, you will be able to see the wisdom and have hope even in the most challenging situations in life.

The meanings of the seal as a spiritual animal:

The seal tattoo designs are a perfect choice for people who are in love with animals, especially water ones. They can be made in a different size, small or large, colorful or with black ink, and can be placed wherever you desire arms, legs, shoulders, ankles, etc. The seal, like a tattoo, symbolizes the same things as the seal as a spiritual animal or an animal totem. People who see the seal as an animal guide, or see themselves with a seal tattoo are considered to be playful, and this tattoo for them serves as a reminder not to get too serious.

This type of tattoo design with the image of a seal sends a powerful message, and that is ‘Going with the flow.’  The hidden meaning behind this message for those why decide to wear it is actually a warning not to fight against the currents and changing tides but instead to open themselves to those opportunities open for them. Furthermore, this type of tattoo is usually chosen by the people who are creative and have a wild imagination.

After everything said, we can definitely say that there is a lot of meaning hidden behind this sea creature that can be easily connected with the purpose of your seal tattoo. The most important thing for you would be to do proper research before you decide to get this type of tattoo.