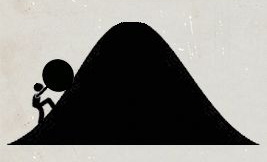 The story is so popular and symbolic that people decide to get a Sisyphus tattoo design permanently on their bodies like a tattoo. If you don’t know the story, you are probably asking yourself why people choose to get them. After doing so, you will understand why people get the image of this mythological being on their bodies.

This story is also a story of a cunning trickster. The image of Sisyphus includes him pushing a boulder up a hill. There is a reason for that.

When this happened, Sisyphus was the King of Ephyra. He had a reputation of being cunning and persuasive as well as a bit of a tyrant. His ruling was with an iron fist, regularly killing guests and travelers, which violated the Greek concept of hospitality.

Sisyphus also betrayed Zeus by giving up the location of Aegina to her father (Asopus). In return, Asopus gave him spring to flow on the acropolis of Corinth.

This is why Zeus had Thanatos (Death) go to King Sisyphus and chain him in Tartarus (The underworld’s dungeons). As a last wish, he asked Thanatos to show him how the chains worked, and Thanatos granted him this. He used this opportunity and locked him up. As a consequence, there was madness on earth as nobody could die. Aries was the most irritated for this since he couldn’t kill his foes on the battlefield. So he freed Thanatos gave Sisyphus to him.

Sisyphus’s punishment for the tracery was to push a giant boulder up a hill. The nature of this punishment was suitable for a king who tried to outwit Zeus himself. He enchanted the boulder. He pushed it to the top of the hill countless times, but the boulder evades Sisyphus at the end. Then it would roll back down to the bottom of the mountain, making him start all over again. He was a favorite topic for writers and was portrayed on the walls of the Lesche at Delphi by Polygnotus.

He symbolizes the sun that rises every day in the east and then sets in the West for many people. Other people look at Sisyphus as a symbol of the waves of the ocean rising and crashing. Some understand his story as a politician running for office and then being loosing over and over. The continuous chase of power comes crashing down every time they get close to the top. It is a lesson about modesty that we should all take note of.

If you think there aren’t many ways to have, it inked you are wrong. People often get artistic with the boulder and styles, making some enthralling versions of the Sisyphus tattoo. Below are some of the most popular Sisyphus tattoos.

Albert Camus, the absurdist philosopher, wrote an essay about Sisyphus. His viewpoint differs from that of most people. Sisyphus’s constant rolling of the boulder up the hill gives the impression that this is the badest thing that could happen to a person. With no other purpose in life other than to keep pushing that rock, it can make anyone mad. The “one must imagine Sisyphus happy” tattoo symbolizes his acceptance and acknowledgment of his absurd fate. However, he is still revolting against the powers that be.

This tattoo is a disobedient one because of that. By getting it, you show that no matter what life throws, you will accept it and not let it control you. This is a great live view, and this tattoo is a symbol of that.

For some people, Sisyphus is a man with a rock on his shoulder. This is far from the representation in the story, but you are free to interpret these tattoos on your own. Many see Sisyphus boulder as his burden. So most people with this tattoo feel they are carrying some burden as well. This tattoo is a symbol of the struggle.

A lot of people with these tattoos include a big clock instead of the boulder. This is a very cool tattoo because it represents time working against us. No matter how much we consider it as a good thing, time flies, and it is catching up.

No matter how you see it, the Sisyphus tattoo can send the message you want to send. Just make sure you take your time in finding the best meaning for you.