The meaning of the shooting star tattoo depends on the person wearing the tattoo. The most popular meaning of this tattoo is good luck. This comes from the fact that the chances of seeing a shooting star are pretty slim. To see it, you have to be looking at the right place at the right time. Lots of people don’t even know what a shooting star looks like, and until you see it for yourself, it is hard to understand what they look like. Only after you have a chance to see this phenomenon, you can realize just how lucky you were. 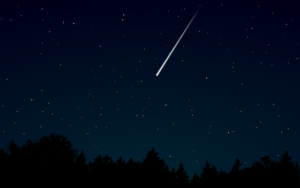 The shooting star tattoo can also represent a big change in your life or a chapter ending. This is because when you see a shooting star, that often means that a star has “died.” In reality, that is dust or a meteorite that is burning up and heading towards the Earth’s atmosphere. The end of this rock suggests the end of whatever you are going through that needs to be finished. So many people decide to get this tattoo to represent that every new day as a fresh start and beginning of new things.

Another reason why people decide to get a shooting star tattoo is that this tattoo can stand for a moment in life. No matter whether that moment was a happy or sad one, the moment has passed just like the spotting of the shooting star, and you need to accept the fact that you should move on with your life. In this way, this tattoo serves as a great way of looking at life and staying in the present. Moreover, it is a perfect reminder for you not to get stuck in the past or looking toward the future. The most important thing that you can do is to enjoy the moments or what they are and then let them pass.

During the time of Ancient Greece, it was a common belief that the falling star was a symbol of falling or rising of souls. This belief is understandable since you are watching something in the sky crash down towards the Earth. In both Christian and Jewish traditions, the shooting star is considered to be a reflection of demons and falling angels.

However, for some cultures in the world, like those in some parts of Asia, it is believed that the sight of a shooting star stands as a sign of misfortune. This phenomenon was understood as tears of the moon. It was seen as a sign of the upcoming death, loss of a loved one, or war. Nevertheless, this is not something that lots of people believed in as most will make a wish when they see a shooting star.

There are some different designs of this tattoo, but many of them have similar meanings. Most often, the person who owns the shooting star tattoo will have star shapes on their body combined with minor stars trailing that star to represent the effect that a shooting star gives off. This image can stand on its own or can be included in a mural of a galaxy or planets. Very much like the rest of the space, the shooting star is an incredible scene, so to capture it on your skin as an eternal tattoo is a perfect way that can serve as a reminder of the message that you are trying to send yourself.

In reality, a shooting star has nothing to do with stars at all. These astonishing strips of light that only those, lucky enough can see are formed by meteoroids, or parts of rock and dust, who are making their way through the sky towards the Earth’s atmosphere and on the way down burning up. That trail of light that you see behind the “star” is, in fact, the burning meteorite, also known as a meteor. Meteors often go under the name falling stars or shooting stars. If any part of the shooting star manages to survive the trip through the Earth’s atmosphere and hits the ground, it will be considered as a meteorite.

If you decide to get this tattoo design, it is very important to find a skillful tattoo artist, who has previous experience with such tattoos. Another thing that you should think about is the design of the tattoo, as well as the meaning that you are going to attach to it. In the end, you can be certain that you are going to end up with an astonishing tattoo, just like the phenomenon itself.