The Annunciation is one of the most popular subjects of Christian art, and it has been found as early as the 4th century AD, in the catacombs at Rome. In the Coptic pilgrimage tradition, the Annunciation tattoo shows the Virgin Mary with hands clasped, and head bowed and an angel nearby or descending. It represents the moment when the angel Gabriel announces to Mary that she will conceive a Son of the Holy Spirit that is represented by the dove with a rayed halo, to be called Jesus (Luke 1:26-38). 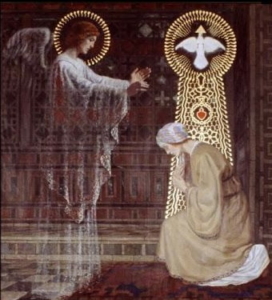 The Church taught that the Annunciation took place in the springtime, “at the time of the flowers.” In addition, according to the scholars of St. Bernard’s time, the name Nazareth in Hebrew signifies a flower. The meanings and symbolism of flowers is a difficult study in itself. A number of them are connected with the Virgin Mary and can be found in various images of her. So, all-white flowers represent the Virgin, while all red flowers represent the crucifixion of Christ.

Somewhere around the 7th century, the Ven. Bede (673-735) linked the Virgin Mary to a white lily, the white petals which are signifying her pure virginal body, as well as the golden anthers the radiance of her soul. Lilies are common symbols in painted Annunciations, and they can be supplemented by several other emblems of chastity dotted around the room: a mirror above the canopied bed, the bed itself with its single pillow.

Some paintings of the Annunciation are usually full of seemingly irrelevant items, but few of them are there purely for decoration. The language, as well as the meaning of the symbols, was familiar to those that commissioned and painted these images, but now a little research has been required to understand them fully. Most of them have religious significance; some have a local meaning or represent the donor in some way.

Even though the Annunciation is less used today, it once had a more important place I nearly Christian art, mainly as it depicts an event which is the prelude to the redemption of the world.