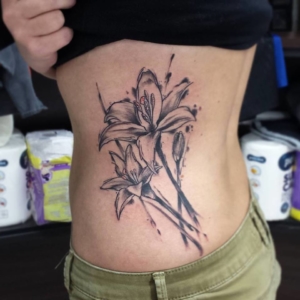 For those people who believe in traditional meanings related to tattoos, the lily flower tattoo will be excellent for them. The lily flower is actually representative of new mothers, particularly those who are nurturing and fertile.

Here, we will talk about the characteristics of the lily flower, and its meaning and symbolism in tattoos.

Lilium is the genus of herbaceous plants that give flowers and grow from bulbs. All of them have large prominent flowers. Lilies are actually a group of flowering plants that are significant in literature and culture around the world.

Many of the species are particularly native to the temperate Northern Hemisphere, and their range extends into the northern subtropics. A lot of other plants have “lily” in their common name. However, they don’t have any relation to true lilies.

Lilies are tall perennials that range in height from 2 to 6 feet. They form tunicless or naked scaly underground bulbs, which are their organs of perennation. In certain North American species, the base of the bulb develops into rhizomes. There can be numerous small bulbs found. Some species develop stolons too. Most of the bulbs are buried profoundly in the ground. However, several species form bulbs near the soil surface.

Many species also form stem-roots. With the help of these, the bulb grows naturally at some depth in the soil. Every year, the new stem puts out adventitious roots above the bulb, as it actually emerges from the soil. These particular roots are in addition to the basal roots which develop at the base of the bulb.

The lily is the favorite motif in the decorative images of the ancient Egyptians. Moreover, it is most preferred among the Greeks of Mycenae, Crete, and Minos. The lily entered into Christian imagery with the Sermon on the Mount. Here, people extolled lilies for their faith and the fact that they don’t toil.

Maybe among the oldest cultivated plants, they were the symbols of chastity for a long time. This is because of the large petals that form an almost trumped-shaped flower. In time, the lily also started symbolizing a pure life, pallid death, or even Christ himself. Moreover, they symbolized the promise of resurrection and immortality.

This beautiful flower is definitely worthy of consideration for your following tattoo. Even though people don’t consider it to be a mainstream tattoo, it is still quite popular. You can design it in many different sizes, forms, alone or in combination with other elements and symbols. You can regularly find it on any part of the body, and it may represent many different things.

People all over the world recognize the lily flower, as it holds a wide range of meanings. Below, we are going to represent the most common ones. Most classically, the lily represents innocence and purity. Moreover, it has a close relation with Christianity and faith. However, in the end, your tattoo is going to represent everything you want it to represent.

These are the most common lily flower tattoo meanings:

Moreover, it can represent life, faith, birth, strength, provision, peace, and so on.

The lily flower also holds a very authentic association with Christianity. Christians consider it to be the symbol of innocence, purity, piety, and chastity. They consider the white lily, for example, to be symbolic of the Madonna – the Virgin Mary.

The importance of the Virgin Mary foes more profound than the eyes can meet. Starting at the stem, it symbolizes the faithful mind of the Madonna. The petals of the lily symbolize her purity and virginity.

The scent that the amazing flower has is representative of her divinity. The leaves represent the humanity of the Virgin Mary. When we take the three petals of the lily together, we will have the holy trinity, which is also the symbol of faith, hope, and charity.

Lily flower tattoos come in many different designs and colors. The pink and purple ones are the two most popular choices when it comes to tattoo colors. The white one rarely finds its use, as the white ink doesn’t stand out on the skin. There are different types of lilies, and that is why artists use different patterns and colors.