Unlike the pig, the wild boar was a partner to the warrior. Into the wild, the boar is an aggressive animal, and it is unrelenting in its attack. Norse warriors used the image of the boar for decorative purposes and its actual teeth for different forms of adornments.

In ancient Japan, the war god himself was sometimes depicted as a boar. The wild boar was a sacred animal for the Celts from whom it symbolized military strength, as well as goodness.

Boars, particularly males, are solitary creatures that prefer to be alone rather than a hand out in a group. Celtic Druids dubbed themselves “boars” as of their solitary ways, and their propensity to wander in the woods as boars do. 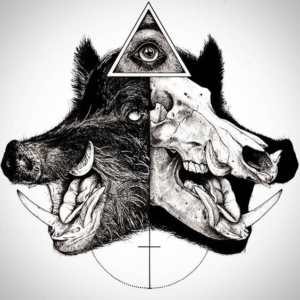 The meaning of wild boar is solitary, protection, mothering, defense, and after all, wild.

Wild boar tattoos are peculiar to the representatives of the more vigorous sex. The wild boar is a leader in the wild nature with characteristics such as ferocity, fearlessness, fury, as well as bellicosity. A boar tattoo can be a symbol of a dark demonic origin, lust, gluttony, as well as slovenliness.

The figure of the head of the boar alone is also a symbol of the amulet, which not only protects from various dangers, but it also gives the power, health, as well as nourishment to the masculine of its owner.

Boar tattoos have a variety of meanings in European nations. The wild boar acted as the guardian and protector of the Celts and inhabitants of the Scandinavian countries, symbolizing the war for them. The boar is also a symbol of military raids and destruction for the Romans and Greeks. The Far Eastern nations, which include the Japanese, invested in the image of a wild boar such traits of character as courage and bravery. Also, for the inhabitants of the Land of the Rising Sun, this animal is a symbol of perseverance in achieving the goals, fearlessness, as well as military courage.

Boar tattoos also have a noble meaning, such as being a symbol of wealth in many nations, as well as fertility and yield in the beliefs of others. The boar tattoo is associated with evil only in some cultures. Christianity in this wild animal sees the embodiment of anger, as well as cruelty and lust.