Egyptian tattoos are considered to be a beautiful representation of power and prominence. They speak of the old days when pharaohs ruled the land, and they put gods and goddesses on high pedestals. Even though it was a different age, the markings have accompanied people through many generations. Egyptian tattoo designs are still popular among many people. This type of theme in tattoos is enthralling because it blends the old days with adventure and enigma that many of us don’t know or understand. It’s become more and more popular in this day and age. 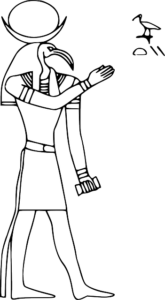 There are lots of distinctive symbols and imagery that are associated with this theme. Tattoo design of the Egyptian god Thoth is one of those motifs. It’s bold and adventuresome and commands respect and honor.

Because the ancient Egyptians put a lot of time and equity in their gods is why many of the tattoos you’ll see today are of these ancient gods.

Where can you place this kind of bodywork?

The most popular placement of such tattoo designs is on the shoulder, chest, and back. For the most part, this is because many of the images are quite large. Because of that, you need a vast expanse of the entire canvas. You will see from time to time the smaller images, and they are often discreetly and uniquely placed on shoulders, feet, wrists, and necks. This is often the female design of an Egyptian tattoo. This type of tattoo can easily be placed behind the ear, on the neck, feet, and hands because of the hieroglyphs. It gives off mysterious allure and is perfect for a starter tattoo.

If any god would have been a tattooist, Thoth is the highest of scribes in the Egyptian pantheon and maintainer of balance in the universe. He is usually illustrated with a man’s body and the head of an ibis or, less commonly, a baboon. Alongside enforcing order throughout the realm of the living, Thoth is an inventor and is attributed to the creation of magical arts, hieroglyphs, and the underworld, among other things.

Because of his association with all art forms, it’s no wonder that he has been depicted so many times throughout history. This started with ancient sculpture and pictograms on pyramid walls and migrating into the world of body art.

Thoth’s main responsibility is to adjudicate the interactions of unruly Egyptian gods, preventing them from throwing the world into chaos. On several occasions, Thoth has turned the tide in battles between powerful deities like Apep and Ma’at. Aside from this crucial occupation, he spends the rest of his time helping humankind by enriching civilization with various inventions. Ancient Egyptians considered him the originator of science, religion, philosophy, magic, and more. He is viewed as the author of every type of knowledge, even that of tattoos.

Thoth’s link to cosmic order depictions of him is often paired with sacred geometric symbols that represent the universe. These symbols are Metatron’s Cube, the Flower of Life, etc.-very similar to in pieces by Jackie Singer Sabur and Robbie Campbell. Tattooists like Claudio Camilucci and Rachel Parks portray him as creating objects (even an electric guitar, talk about anachronistic) and recording information. Regardless of what features of his mythology, they choose to the highpoint. All of these tattoos channel the imagination embodied by Thoth’s figure in powerful ways.

Both males and females get Egyptian tattoos since they are both masculine and feminine. The gods and goddesses of old times hold meaning to people as well as look like astonishing images. People of both sexes have been fascinated with them for decades, and artists are pretty great at capturing on the canvas–your body. This is the reason why the tattoo designs that include Thoth are popular among both men and women.

Though each tattoo holds special meaning to that specific person, it’s essential to know what the image represents historically. When deciding which design of Thoth tattoo is right for you, be sure to find out what your image means. If it’s something you like and think represents who you are, then definitely get it.

Even if the image doesn’t embody you, you can still decide to get it. However, you should be aware that people might misinterpret the meaning when they initially see it. Tattoos are something that allows us to express ourselves on our bodies in a way that other artists cannot. This is why you should have fun exploring all the different options and images available. Creating the perfect image for you is a unique and creative journey.