In the world of tattoos, heart designs are the most widespread designs, but that doesn’t mean that they are all similar and with the meaning of romantic love. Sacred heart tattoos are related to another type of love, and that is faith. These types of tattoo designs are closely related and devoted to the Catholic faith and belong to religious art.  The known meaning of the sacred heart is closely associated with Jesus Christ, symbolizing his great sacrificial love for humanity. June is the month of the sacred heart that appears next to the immaculate heart, which is the symbol of the Virgin Mary, mother of Jesus Christ. 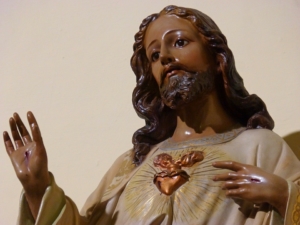 In the beginning, sacred heart tattoos seemed rather essential in design; however, that is not the case. The very basic layout of this tattoo would be outlined in black. The heart itself shaped like the original fake heart but with more apple shape, always circled with a double loop of thorns and fire bursting from the top. There are some occasions where there is a cross on top of the fire. The whole design carries a symbolic meaning. The heart stands for the sacred heart of Jesus; the fire represents the holy love and its transforming power, whereas the cross and the thorns represent the crucifixion of Jesus. The reason why these sacred heart tattoo designs are so popular is probably that they are full of symbolism, spirituality, meanings, and promises made by Jesus. Some of the most beautiful sacred heart tattoo designs are in color ink. The heart is always in red, with a golden glow in the center, dark contrasting color for the almost razor wire appearing thorns, the flames originally in orange, red and yellow, whereas the color of the cross depends on your wish and what you decide with the tattoo artist. Thes design can also be made in traditional black and white ink.

Depending on the size of the tattoo, this design can be placed anywhere on the body. For instance, the sacred heart tattoo can be placed on either of the arms, chest, forearm, either of the legs, hand, neck, foot, face, etc. The placement and the kind of design you are going to choose to depend on your wish. There are many variations that have been made in relation to this particular tattoo design. One was previously mentioned. Another popular design is with a wounded heart, encircled with a crown of thorns and radiating light and flames of passion. The heart can be made in a number of different ways, such as in a flat two-dimensional view, a realistic, anatomic organ, or as a sort of three-dimensional spouted flask. There are some rare occasions when the heart is depicted with arrows. Each symbol that goes with this design has a symbolic meaning on its own. There are three reasons why the heart is often in flames. First, Christ’s self- offering on the cross represents a perfect consummation of all the sacrifices in the Old Testament that necessarily include burnt offerings. Second, the fire is always associated with the essence of divinity in the Old Testament.

At last, the burning flames represent the passion and love that Christ carried for humans. Furthermore, the rays of light have their own symbolic meaning. As the light of the world, Christ also ‘enlightens’ us by reviling God to us.

The sacred heart represents the climax of self-revelation by presenting the love of God for all of us. In this tattoo design, the crown encircles the heart, whereas traditionally, the crown of thorns is on Christ’s head. The wrapping of the heart with a thorn crown emphasizes the fact that Christ felt his wounds to the depth of his heart. Furthermore, after the resurrection, the crown of thorns becomes a crown of victory. Finally, the thorns of the crown represent the sins made by humans that wound Christ.

As we mentioned, sometimes, this design is depicted with arrows. The possible explanation is that the arrow represents a sin. Another possible answer is that the arrow represents a symbol of love according to the ancient myth for Cupid. There are also sacred heart tattoo designs that include the cross. Naturally, the cross symbolizes the crucifixion and is closely connected with the heart of Jesus.

This is, by far, one of the most used religious tattoo designs in the world. It’s very flexible, and it can be combined with other religious-themed designs or something different like flowers, for example. I think that the reason for that is the heart. It a motive that holds a lot of symbolism and weight, and it’s not necessarily connected with religion. That’s why people can relate really quickly, and by that, they can find their connectivity with the symbol that goes far beyond one man’s beliefs.