Whenever you see the image of a grenade, the first things that come to mind are thoughts of war and explosions. Some people consider this image as a sign of caution. For other people, a grenade is a symbol of life or death, since it reminds them of military time. Even though everything that was previously said about grenades is correct, there is a much deeper meaning behind the grenade tattoo then it might seem. If you are inspired to get a grenade tattoo design, the meaning and symbolism that you attach to it are entirely up to you.

History of the Grenade

The name of the creator of the grenade is unknown to us, but what we do know is that this device was first being used sometime in the 15th century. In the past, the grenade did not have the sleek shell and pin as the grenades we are familiar with nowadays, but instead, a tin can be packed with rocks and gunpowder. This was set with a fuse, which was fundamentally a string of rope that was lit on fire. The tin can was thrown after the fuse was lit and close to the core and would, of course, explode once the fuse reached the gunpowder. 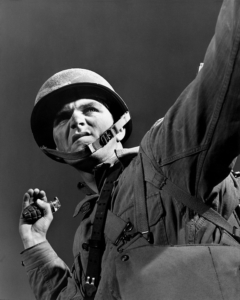 As time passed, the design of the grenade changed as well. The grenade started to lose popularity in the 19th century due to the discovery of guns. With the development of technology, the weapon received a new look, making the device more explosive and dangerous than ever.

Even though this device brings destruction and war, when it comes to tattoos, it makes an attractive look. Just like with most of the tattoos, there is some strong symbolism behind the grenade tattoo. The majority of people who own this kind of tattoo have been to war or at least part of the military. Other people choose to get this tattoo because they have been witnesses of war, as civilians who had to struggle through the terror of conflicts happening in their homelands. This tattoo is also chosen by people who lost their loved ones in a time of war. This tattoo can reveal a lot of things about the person wearing the tattoo.

If you decide to choose the less violent and severe note of grenades being fatal weapons used to eliminate the enemy, then this design of grenade tattoos is perfect for you. This particular type of design is popular among those people who are more interested in a ‘flashy tattoo’ style. In this piece of art, you can put the grenade in action, incorporating explosions and bangs in the background.

The angel-winged tattoo is a popular choice among people who have lost their loved ones in war. Since a grenade is a highly explosive and dynamic weapon that all soldiers are trained to use, it is a way of symbolizing the soldier who died, when you include angel wings on the back of the grenade that helps in the further explanation to others why you have this tattoo design in the first place.

The pineapple grenade is a nickname given to the MK 2 grenade. This grenade received the nickname purely because it’s very much as the pineapple fruit itself. People who want to experiment with their tattoo design, instead of getting the standard grenade with the army green color, turn the whole grenade into a pineapple. They even include a fuse and pin inserted on top. This pineapple grenade tattoo design represents another creative look of these tattoos.

Another design that you can use if you want to honor a lost loved one in war is the tattoo that includes a heart-shaped grenade. Very much as the pineapple idea previously mentioned, having the grenade shaped into a heart can mean a couple of different things. It can indicate that you lost a loved one to war, or it could symbolize your love for the weapon itself. A heart grenade can also prove that the individual wearing it is a sensitive person. It shows that once you pull this pin, the heart could explode, just like their emotions when being played with.

The designs that were mentioned above are only some ideas for your grenade tattoo. Just like with any other tattoo design, you are free to experiment until you create your one of a kind art design.