The United States Air Force is the division of the U.S. military that is accountable for air warfare defense and space research. The symbol used in different military branches is often turned into tattoo artwork in all countries and periods. For many military organizations centered on aviation, wings are a significant ingredient in the design. In this particular design, the American eagle and flag are the main elements. Still, it is the propeller that represents aircraft. 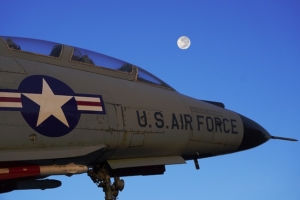 The USAF symbol was thoughtfully designed to represent the Air Force’s history and the promise of the future of the branch of the armed forces. This symbol can take two different forms purely depending on how you choose to see it. First, a medal of valor in service or our nation’s emblem of freedom, or an eagle.

The U.S. Air Force symbol pays respect to the American past and symbolizes the potential of the future. It retains the core elements of U.S. Air Corps heritage: the “Arnold” wings and stars with a circle, modernizing them to reflect the air and space force of today and tomorrow. The symbol has two main parts. In the upper half, the stylized wings symbolize the stripes of the American people’s strength and the recruited men and women of their force. The symbols are drawn with outstanding sharpness to emphasize their swiftness and power.

They are also separated into six sections. They signify their distinguishing capabilities such as air and space superiority, rapid global mobility, global attack, information superiority, precision engagement, and agile combat support. The lower half encompasses a sphere, a star, and three diamonds. The sphere within the star symbolizes the globe. For them, it is a reminder of their duty to protect the nation’s liberty with Global Vigilance, Reach, and Power. The globe also serves as a reminder of the challenge as an expeditionary force to respond rapidly to crises and provide decisive aerospace power worldwide. The area surrounding the sphere is in the shape of a star. The star has many meanings. Its five points represent the U.S. Total Force and family components, the active duty, civilians, National Guard, Reserves, and retired personnel. The star defines space as the high ground of the U.S. nation’s air and space force.

As a rallying symbol in all wars, the star also represents their officer corps, central for their military leadership. The star is surrounded by three diamonds, which represent U.S. core values and that are: integrity comes first, service before self, and excellence in all things they do. The elements come together to design one symbol that represents two powerful images at once. It is an eagle, the symbol of the nation, and a medal, representing courage in service to their nation.

The air force is known as one of the largest military organizations nowadays. The Air Force consists of a group of both males and females who have committed to serving the United States country. The primary responsibility of people members of this group is to maintain control of the air. The most used types of air force equipment are bombers, helicopters, and transport planes. The air force tattoo represents a symbol of people who are in some way connected to the air force. This tattoo can be done in several designs, and the one you choose could depend on the ranking you’re in if you’re a member of the air force. Because both males and females are involved in this military organization, it’s common for both to get this type of tattoo.

The unit’s standard insignia is practically made for body art purposes. This is evident considering the sharp overlapping wings that create a riveting star. With its solid roughness, the distinct logo can be swiftly adapted into any more extensive array of ink.

These grand masterpieces are vastly regarded, and you can wear them as a badge of integrity. Furthermore, these can also turn medals awarded by the Air Force into fascinating ink portraits. With the poignancy of Air Force tattoos, both man and woman can unleash their coolly collected composure. These emotional icons are splendidly understated while boasting their unrivaled physical capabilities.

Getting an Air Force tattoo doesn’t necessarily mean that you have to be in the military branch. There are people who people are related to or married to loved ones in this division of armed forces that can wear Air Force tattoos. Just like every other part of the military, the Air Force puts its soldiers at high risk of death, accidents during combat, or only by mistake happen. There is a way to honor a loved one who passed away through this kind of tattoo. For instance, you can get a tattoo of a heart with the Air Force symbol within it, the individual’s birth and death date.

This is a genuine and straightforward tattoo that sends a message of not forgetting our fallen soldiers. The Air Force has its badges. These badges signify special skills and qualifications and served as a form of identification of ranking. Getting a tattoo of a particular emblem you are proud of receiving not only reveals your achievements outside the uniform. This is a solid reminder to yourself who you are and what you have done. For instance, aviation badges have many different designs. Still, the primary similarities in all of them are the two wings spread open with a symbol of the middle’s skill or occupation.