Egyptians have a rich culture, as well as history. They were among the many people that practiced ancient art. Their love for the ancient art is common in their paintings, structures, and even tattoos. The designs of the modern Egyptian goddess tattoos find their basis on ancient Egyptian symbols, images of gods and goddesses, animals, kings, and queens.

When we actually think of civilization, we often think of Egypt. Egyptian civilization is full of mysteries, together with a great deal of spirituality. The mythology and also the culture of ancient Egypt has been a significant part of the Egyptian civilization. It fascinates many people around the world. The hieroglyphs, for example, tell us a lot about Egyptian culture when the Pharaohs existed. 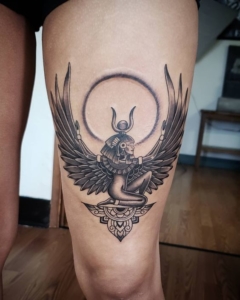 Many people get Egyptian tattoos because their stories, deep meanings, and beautiful designs fascinate them. If you are thinking about getting an Egyptian tattoo, or you already have one, you made the right choice. You can simply show your appreciation for ancient Egyptian art by getting Egyptian tattoos.

Even if you don’t have Egyptian roots, you can still get this type of tattoo design. All you have to do before tattooing is research the meaning of your chosen image or symbol. Do this so that you will avoid offending other beliefs and cultures.

One reason why these tattoos are very popular even nowadays is because of their rich symbolic and ornate imagery. It is a challenge for people to decipher the meaning behind these symbols, as one symbol may mean different things. This actually makes their art more mysterious and more intriguing as well.

Here, we are going to talk about the tattoos of the Egyptian goddess Isis. This goddess is probably the most popular subject from Egyptian origin in modern tattoo imagery.

Isis is one goddess from Egyptian mythology. She was actually a caring goddess and loved all. She even loved her envious brother Set.

Isis was the wife of Osiris, and they had a son named Horus. Isis was the protector of children, the healer of sick, and the goddess of magic and life. She was definitely the greatest goddess in Egyptian mythology.

The symbols of this goddess were the ankh, her wings, and also her throne headdress. The English pronunciation of her name comes from the pronunciation of her Greek name. The Greek name later influenced the Egyptian name, by adding a final S. This was because of the grammatical requirements of Greek noun endings.

The meaning of the Egyptian name was “She of the Throne.” But, the true Egyptian pronunciation is still not known, as their writing system left out vowels. According to studies from recently, the reconstructed pronunciation of her name has also changed.

Isis is easily the most significant and illustrious of all the ancient Egyptian goddesses. Also, it is the most popular one in modern tattoo imagery.

Frequently depicted with long wings with which she protects the dead, and standing in the pantheon, she was Osiris’ wife and the mother of Horus. Eventually, her worship spread beyond Egypt, and she also became an all-powerful and universal goddess around the Mediterranean.

Tattoos of goddesses are becoming quite popular, especially because of the depiction of Isis on the famous singer Rihanna. However, they are popular because they are intriguing figures with a rich history.

The Egyptian pantheon is full of alluring ladies with unbelievably otherworldly abilities. These deities have a powerful feminine mystique, reigning over some of the most mysterious aspects of death and life. But, best of all, they also make for magical, as well as visually striking body art.

Just like we already mentioned, Isis is the most impressive goddess from the pantheon. Her name means “throne,” and she is also the ideal matronly figure in Egyptian mythology. This actually means the perfect mother and wife at the same time. She is the patroness of magic and nature and protects underprivileged on top of being a confidant for rulers and aristocrats. Her domain is a wide-reaching one, encompassing the realm of the dead and that of childbirth. Shortly said, there are several female deities as profound as this one.

Other symbols of the goddess Isis is the one of motherhood, magic, and fertility. She was a protective goddess, using powerful magic spells to help the people that needed help. According to other beliefs and sources, she is the symbol of marriage, health, and wisdom too.

All these meanings and symbols, which have a connection with this goddess, also apply to the tattoos of Isis. Isis tattoos will symbolize the same things as the goddess Isis itself symbolizes and means. As a result of her importance in this ancient culture, Isis tattoos are also important among the people living there.