Spade tattoos are not that popular tattoos nowadays. However, plenty of people still get one of these designs for many reasons. What’s strange about the spade tattoo is that it has a wide range of meanings. This means that you usually have to be close with the owner to precisely know what their spade tattoo means. A spade can stand for many things. The significance of each tattoo lies in the details that accompany it. For instance, you can reveal the meaning from the numbers that are included. 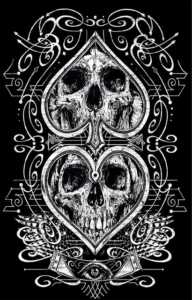 The spade is a different name for the original “pike” suit from the centuries-old French suits of playing cards. The pike or spade symbolizes the guard and the spear that they carry to protect the castle and the kingdom that it rules. These symbols are taken from the German suits, rooted in the Latin suits where the design was originally a sword.
When a person decides to get this tattoo, a precise card can accompany the spade and create a unique design. The tattoo artist may choose the queen of spades for a more feminine design. You can choose to include only the “Q” along with the spade symbol to indicate the queen card. They will use the king of spades alternately to create a masculine tattoo. This tattoo can include the “K” as an indication of this. Couples may receive a King of spades and a Queen of spades tattoo if they want to symbolize their relationship. An “A” may be incorporated instead to indicate the ace card. This is a symbol of both one and eleven, both high and low rankings. Even though any color or pattern could describe the individual who receives it in a better way, these tattoos are almost always done in black. The reason for that is to be true to the suit that they represent.
The specific card that accompanies the spade is often a symbol of ranking. Due to the significance of the ace in card games and gambling, it is a symbol of reputation and competency and wit and cunning. The queen and king are suitably a symbol of royalty and signify importance. We could use a specific number to symbolize one’s favorite number or use the number “7”, which is famous as a lucky number.
Instead of a solid black motif, bohemian designs are frequently part of the design to fill in the spade to create a more ornamented and unique design. Thick white lines and dots are the patterns used to add detail to the design. The embellishment also gives the spade a more traditional look that listens to the “Old School” style of tattooing. The artist may incorporate a number in this line of work as well.
Often gamblers who love gambling so much decide to get a spade tattoo to show it. The spade owns a unique shape of the four card suits, so naturally, it’s more popular than hearts, diamonds, and clubs. Also, it’s the richest with meaning. When ranking suits of cards, spades is the highest, this is another reason why some people get the spade tattoo to symbolize power. Here, the owners either want to be seen as powerful, or they want to accomplish big things in their lives. They could also use it to frighten other people.
You should remember that spades are more than just symbols on cards. They are also digging tools. There aren’t too many tattoo designs out there that symbolize work. This is why some people will get the spade tattoos to represent precisely that. The spade tattoo is ideal for hard workers or those who want a reminder to work hard every day of their lives.

Often the spade is considered as a unisex symbol so that people could get it for that reason.

Although it isn’t the most popular tattoo for transgender people, some transgender will get the spade as a symbol of pride.
The suit of swords (spades) is linked to the noble class or second estate in tarot cards. This symbol denotes the social rank of those who sport it. This also incorporates the military and the spears, swords, bows, and arrows they use to fight. When spades arise during a tarot card reading, the symbols are ordinarily mischievous and foreboding. This leads to the association between the spade and the ominous. In this way, the design is related to the occult and highlights the sinister side of the suit.
If the owner wants it to be, the spade tattoos can be a pretty dark tattoo. Though the ace of spades can mean that the owner loves cards, they could also get it to signify death. When the design includes a darker symbolism, a grim reaper, blood, or other dark images will often be accompanied. Skulls are often added to the center of the spade tattoo to give a threatening tone to the design. Because the spade is a symbol of weaponry (the pike), death is a theme that perfectly suits the design.
Some people like the shape and overall look of this tattoo. There isn’t much meaning in the shape of the spade. This is precisely why lots of people put images inside of the spade outline. In these cases, the possibilities are endless since there could be plenty of space for just about any other image inside of the spade.