If you are searching for a tattoo design that has some symbolic meaning for you, a buffalo skull tattoo might be the right one for you. They can be designed in a lot of different ways and forms, and while they are popular, they are not mainstream.

You can design this tattoo to stand on its own, or with some other symbols which include feathers, flowers, flags, crosses, and dream catchers. Here, we will discuss some of the meanings behind this tattoo design, and hopefully, you are going to find some ideas and inspiration for your tattoo. 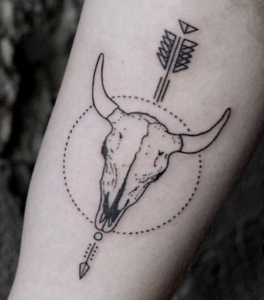 Because the buffalo figured so largely in the way of life of Plains Indians, as well as in their mythology, it is not a surprise to find that the buffalo skull played a huge and important role in their sacred rituals as well. There are also a variety of different reasons for the popularity of this image. Some Native American tribes believe that the buffalo skull is a symbol of life-long protection from all-natural elements. Today, the image still represents some of the attributes of the buffalo, such as courage, toughness, as well as agility.

Some other meanings and attributes associated with the buffalo skull images are the following:

Tattoo art, which uses the buffalo skull, frequently capitalizes on these associations by pairing it with some other artifacts of the Plains Indians, such as beads, feathers, strips of leather, as well as red paint. In the rituals of Plains Indians, the buffalo skull has been used as an altar, carried the power of the buffalo itself, and even housed the Buffalo god, depending on the particular Plains group. Therefore, it is also connected to power, both physical, as well as supernatural.