Skull tattoos have a wide array of meanings, and it is all going to depend on how the actual skull is utilized. For example, a lot of people associated with the human skull tattoo with large eye sockets with death, but this can also make for a beautiful tattoo.

There are people who choose these tattoos only to show that they are not afraid of death. Also, the skull tattoo designs can be a symbol that the person has accepted their mortality. There is another symbolism of these tattoos, and it is that they are a constant reminder that every one of us is going to die one day and that we should always live each day to the fullest, just like it was their last one.

But, what about a cow skull tattoo? First, let’s take a look at the cow symbolism and meaning. 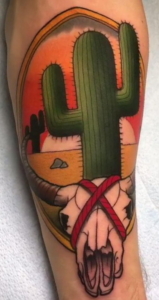 Almost in every part of the world, the metaphysical meaning for cows includes life’s continuance, Mother Goddesses, motherhood, as well as nurturing the soul. Among the communities, the phrase ‘Holy cow’ is not merely an expression. Still, the cow is a sacred animal there, so much that they do not eat beef and also have special housing for some elder cows, who will never know how does it feel to be put out to pasture.

As cows provide us with milk and foods, the symbolism of fertility, as well as meeting material needs, can also be applied to it. Deities with Cows connections such as Nut like a nursemaid to humankind, especially children and mothers. Images of Nut show her as a giant cow that embodies the heavens, and her titles include ‘she who bore the Gods’ and ‘she who protects.’

This gives cows a very moving association with safeguarding the most vulnerable people, and also intense sacred energies.

Even though cows do not play a huge role in the Native American Animals’ lore and legend, bulls do. In the Celtic Animal Symbolism, on the other hand, the cow is sacred to the Mother Goddess Brigit that is the governor of the Earth, children, mothers, health, nurturing, Providence, as well as the full range of the female element of the Universe.

The skull tattoo connotes death. For a long time, it was engraved in our minds that when we see one, we know that it signifies death. And in most of the cultures, death doesn’t sound inviting. However, in others, it is some kind of a new beginning. The skull, which it represents, also suggests a happening beyond death, which is not always negative. As for cows, it is well-known that they are gentle creatures and are also patronized in some religions as the sustainer of energy. So, when we see a cow skull, what do we see? It is the death of this beautiful animal, or is it something more profound? We will look at the ancient traditions which honed the meaning of cow skulls in their time and see what it means to have one in this day and age, in various forms.

Some early tribes, like the Balinese indigenous people, as well as the Native Americans, believed that nothing should go to waste. So, when they hunt for food, each part of the animal they hunted was utilized in something meaningful, such as food, clothing, shelter, or sacred relics, everything that could be of good use. As these animals provide so much for their daily living, they are also highly respected and even treated as sources of life.

The cow skull is made into a tribute for the well-appreciated animal that had played its important role.

Sometimes also combined with some Native American symbols like shields, beads, as well as bird feathers, the cow skull becomes more like the symbol of the buffalo skull, which is considered the source of ritual, as well as otherworldly power. Because of this, the cow skull is utilized in the world of tattoos, as it is an interesting design.

Skull tattoo carry more symbolism than other animal bones, probably because they were more representative, as well as indicative of the animal when it was alive.

Generally, the bones are the last remnants of a body, no matter if it is a human one or an animal one, and because of that, they also carry a sense of death, as well as the impermanence of life.

Skulls are indeed important to a lot of different religions, as well as cultures, but the eastern fascination with them is unique. We can say that it is a bit morbid. Still, there is a specific quality to skulls, especially those of cows as the animal itself is considered sacred in a few cultures, signifying a death in some of them and new beginning or birth in others.