When looking at the skull or skull tattoos, it is hard not to be awake and focused; after all, it is a confrontation with the fact that we mortals. Every culture throughout history has had a similar response – and shaped customs and their own beliefs.

The skull is often viewed as a sign of death and associated with a negative or Tama vibrations but, skulls serve numerous symbolic purposes such as being worn as a magical protection charm.

It seems as the skulls enjoy being taken places as this permits them to finish a few of their destiny, their work. It’s also a universal sign of wisdom and truth.

Once you take an interest in skulls and you start to resonate with the particular energy of them, you might wonder what else you may use them for.

Although it’s been viewed and associated with several negative things in earlier times nowadays, it indeed isn’t considered in that fashion anymore. It’s super-groovy to travel together with you on your symbolic path, and possibly provide a small translation on the way. It is a procedure for developing your inner wisdom and spiritual comprehension.

The skull received strong religious connotations in plenty of cultures.

This is true for two of the largest religions from the east: Hinduism and Buddhism. Being familiar with death and life, skulls have been utilized by both of these religions in depictions and art of deities. Skulls symbolically are so significant that they have been tracked all of the ways back into the dawn of the Hindu culture – over 5,000 decades back.

In India, skulls carried a particularly significant role in religious depictions. Skulls frequently ornamented ancient gods and goddesses as necklaces or bracelets, showing their ability to defeat death. For example, Nataraja, an incarnation of Shiva, dances the cosmic dance of creation with a necklace of skulls adorning him. The garland of skulls around his neck represents him as time and the death of all living things. To the Hindu, this is a natural and normal progression of life; everything moves circularly. Life and death are both parts of the cosmic drama, and due to that are embraced- not resisted.

As the depiction of skulls in Hinduism is reasonably straightforward, Buddhism and Tibetan Buddhism take it a little deeper, with unique perspectives. Similar to Hinduism, skulls are usually depicted as a jewelry necklace around a deity. They’re also known as Munda malas. However, instead of representing death or loss, it represents the important Buddhist concept of emptiness. In Buddhism, emptiness is considered to be a quality of the universe.

This means that the phenomena we experience have no inherent nature by itself; instead, we attach meaning to what we experience. It’s fundamentally saying all events are neutral- but we choose to magnify them in our minds. A skull´s four canine teeth are represented as symbols of cutting through of the four maras (obstructions). Single skulls appear in different forms and functions in Tibetan iconography.

For instance, a skull-lamp, that burns human fat, with its tongue as a wick, would be described as a cleansing symbol. The body (skull) is cleansed by the fire, as are speech (tongue) and mind (fat). This example is obtained from the ancient Hindu cremation process. Rather grim, but it gets to the point: life is brief and fragile.

Celtic culture considered the Head or skull to be the seat of power. There are some texts that point to the skull as the house of the soul.

Archeological findings reveal to us that the Celts tossed skulls into sacred wells as offerings. We can look to the analogy of water and know it carries meanings of cleansing, purification, and fluidity of motion (emotions are also a water symbol). According to that, if skulls symbolize the seat of the soul and power, possibly hurling them into the dark depths of sacred well water points out to intent to cleanse the soul or offer divine clarity and renewal for the soul. Moreover, there are three significant openings recognized in the skull, and three is also a sacred number to the Celts, it signifies a progressive dance between banal and cosmic, ultimately birthing a new direction in perception.

Bull Skull: Famous in Texas and the Western United States, the bull skull tattoos represents a symbol of strength, courage, and agility.

Cross-Bones Skull: The base of this classic skull tattoo design is the pirate’s emblem, and it stands as a representation of the ruthlessness and despair associated with the life of a pirate. The cross-bones can also symbolize poison.

Death’s Head: Also recognized as Totenkopf in German, is a skull design that is derived initially from Elizabethan England. This design shows a skull without a lower jaw, and it represents moral deviations. Drug dealers and prostitutes often tattooed these designs to express their business and way of life.

Grim Reaper: Perhaps the most straightforward of the skull tattoos, the Grim Reaper skull is adorned with a long scythe and a black robe, and it represents courage, good fortune, and the circle of life. 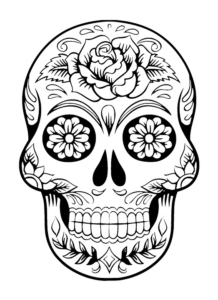 Sugar (Mexican) Skull: The Day of the Dead (in Mexico) is recognized as a popular celebration where families get together to create decorated skulls out of sugar or candy. These skulls are a symbol of a celebration of life.

Rose Skull: Skull with a rose held in its mouth is a trendy tattoo design that symbolizes the duality between life and death.

Serpent Skull: Frequently depicted in the traditional American style, the skull with the serpent is recognized as a gothic symbol that stands for knowledge’s persistence beyond death. The snake is a symbol of wisdom and secrecy, whereas this design is a symbol of death.

Shakespeare Skull: In Shakespeare’s play Hamlet, Hamlet laments the death of his jester, Yorick, remarking that he was a “fellow of infinite jest,” while gazing at his skull. This skull symbolizes life’s absurdity and the union of comedy and death.

Tribal Skull: This bold, geometric skull design is created in memory of those who have passed away, and it can also represent a symbol of ghostly appearances from those who have died.

This is a worldwide recognized symbol, and its badass aesthetic has kept its allure over the years. Whether it stands and symbolizes the sinister or the hopeful, the skull is a powerful image that people can relate to.