The coyote is a wild animal from which initially we should be afraid, as well as which we should respect and appreciate this animal. Across a number of western cultures, this animal is seen as an embodiment of the spirit of Mother Nature, and, despite the buffalo, it became the quintessential image of the Wild West.

The coyote is a canine that is native to North America. It is smaller than its close relative, the gray wolf, and it is smaller in size than the closely related cousin eastern wolf and red wolf. It fills much of the same ecological niche as the golden jackal does in Eurasia, although it is larger, as well as more predatory. 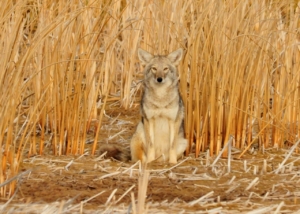 The coyote is also listed as least concern by the International Union for Conservation of Nature because of its wide distribution, as well as its abundance throughout North America, southwards through Mexico, and into Central America. This species is also versatile, and it has the ability to adapt to and expand into environments that are modified by humans.

The male coyotes average 8 to 20kg in weight, while the female coyotes average 7 to 18kg, though the size varies geographically. The northern subspecies, which average 18kg, tend to grow larger than the southern subspecies of Mexico, which average 11.5kg. Their body length ranges on average from 1.0 to 1.35 m and tail length 40 cm, with females being shorter in both body length and height.

The color, as well as the texture of the fur of the coyote, also varies somewhat geographically. The predominant color of the hair is gray and red or fulvous, interspersed around the body with black and white.

The word ‘coyote’ is, in fact, a Mexican reboot of the Aztec word ‘coyoti,’ which means trickster. In a lot of Mesoamerican, as well as Native American cultures, the coyote is seen as the ultimate trickster that brings a lot of gifts to humankind or steals much-needed resources form unsuspecting mortals and deities.

Almost universally in Native American mythology, the coyote plays, as well as symbolizes a dual role. Most of the times, this animal is considered the creator but also the trickster, and sometimes the source of the death being introduced to human beings.

Just like some other Native American imagery, the coyote was co-opted by the modern Southwestern culture, and it can be seen in a lot of different images with the Full Moon or maybe next to a cactus.

As a trickster, as well as on occasion being a reluctant hero, this animal can be found in the mythology of almost every different tribe that can be found throughout the Americas. Rude, as well as restless and interfering, the coyote is a nevertheless a powerful totem and a symbol of survival, health, and adaptability.

The coyote is an animal that has infinite wisdom, as well as intellect and knowledge, and it is not quite uncommon to find Native American stories in which it plays the role of a wise counselor. In others, it is the cunning deceiver. The Native American shamans, as well as storytellers, were probably inspired by observing the pack on the hunt. Coyotes are also well-known as exceptional hunters and often display an enhanced ability to communicate, plan, and even coordinate the movements of the pack.

The coyote is an animal of power. It is wild, as well as uncontrollable, while at the same time being nurturing and protective. Coyote tattoos embody a few traits, which include the following:

For the Native Americans, the coyote animal is seen as an animal spirit guide, and being such, it is also seen as a guardian through whom the individual is guided in ways that lead to a healthier life, spiritually, emotionally, as well as physically. The coyote has a lot of traits, most of which are often negative, such as greed, gluttony, squandering, and cheating, and they are symbolic of the obstacles which humans need to face. It is also an independent animal and has an adventurous spirit, which is often reflected in a lot of the stories which are told even nowadays.

The coyote tattoos can embody a lot of different moods, as well as personalities. In a lot of the designs, the animal is drawn in a position of strength and power, and sometimes it is connected or infused with the image of natural elements such as a Full Moon, a bolt of lightning, or also sitting high atop of the cliff. Tattoo, with such depictions, actually pays homage to the strength, as well as the dominance of the coyote.

Channel your inner coyote with some great tattoo designs which speak about your mental astuteness, as well as a powerful presence.