All life is touched and stimulated by the moon, particularly dark life. The flora and the fauna also dance in lunar reels, enchanted by the moon. Oceanic mouths open, as well as close in a serenade to the lunar phases. And also, people that are linked-in with hidden powers of the cosmos are prompted to bask in lunar rays for authentic illuminations.

This is a life-affirming symbol. It seems to be changing all the time, hence, reminding people of the consistency of all life. The moon is also a symbol of the cyclical nature of time – even karma. Life moves in non-linear terms, and we all know that karma is a big circle. The moon in her phases also reminds us of this kind of infinite process of regeneration and recycling. Here, we are going to focus on the crescent moon, and its symbolism when accompanied by a star. 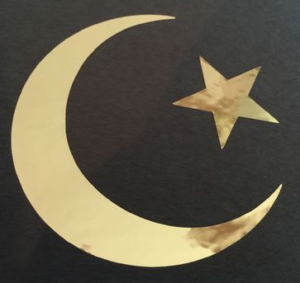 Nowadays, this symbol is universally recognized as the symbol of the Islamic faith. For that reason, it appears on the flags of a lot of countries in which Islam is a majority religion or which has a large Muslim population. Right now, there are eight countries that have this symbol on their national flags, and all of them are Muslim-majority.

As we already mentioned, this is the general symbol of Islam, representing the waning moon and the morning star. The five points of the star represent the five pillars of Islam, the Muslim religion which was found by the prophet Mohammed: the profession of faith; prayer; giving of a small percentage of the income of a person to help the poor; fasting in the month of Ramadan; and also pilgrimage to the holy city of Mecca.

However, the crescent and star symbol was not always associated with the Islamic faith. Before the discovering of that religion, the crescent symbol existed in ancient Greece, where it has been associated with different moon goddesses. It has been later adopted by the Byzantines, who utilized it to represent the goddess Artemis. When the capital of Byzantine Empire, Constantinople, became Christian in 330 CE, an 8-pointed star, which is a frequent symbol of the Virgin Mary, was added to the crescent to create the city flag.

So, this was also the symbol of Constantinople, which today is the city of Istanbul, at that time being the capital city of the Eastern Roman Empire, Byzantium. When the Turks succeeded in conquering Constantinople, they also adopted the symbol of the city, appropriating it for the Ottoman-Turkish Empire. Eventually, the use of this symbol spread to the flags of the Islamic countries.

Both the moon and the star or stars are among the most popular tattoo designs in the whole world. However, what is the unique significance and symbolism behind this tattoo, accompanied by a star?

Centuries ago, long before the Turk peoples converted to Islam, as well as adopted the crescent moon with a star as a central emblem for their national flag, the moon and the star were symbols of their shamanistic beliefs. It was also seen as the symbol of the ancient city of Constantinople, Istanbul nowadays, which was conquered by Osman, who was the founder of the Ottoman Empire in the 15th century. Osman dreamed of a crescent moon that was hanging over the whole world, so he kept it as the symbol of his conquest and also as a symbol of the Ottoman dynasty.

As the battles between the Turks and the Christians raged all over Europe and beyond, this symbol with a star was mistakenly attributed to the Islamic faith. But, Islam has historically had no symbol or symbols, and a lot of Muslims find the use of this symbol blasphemous, even nowadays.

The crescent moon with a star was also a common symbol used in tattoo art, particularly by those that were Muslims and wanted to represent their Islamic heritage, as well as faith.

A crescent moon and star tattoo may be done in a lot of different designs and have a great number of meanings. A lot of people focus on the traditional, as well as the simple design of a crescent moon with a star that stands in the open area of the moon. This became a widely utilized tattoo symbol around the world.

There is controversy over the meaning of this symbol. Some people utilize the crescent moon and star tattoo as a symbol of the Islamic faith and heritage. In contrast, others believe that the moon and stars are a symbol of the curiosity of human beings when learning about the tides, universe, as well as time.

Overall, the basic symbolism of the crescent moon with a star tattoo design is open to interpretation, and it may be modified in order to fit the personality of different wearers and tattoo lovers.