Are you shadow-walker? Do you appreciate the magic of the night and the mystery of the darkness? Do you love the deep secrets cloaked in shadow? If you do, an owl tattoo design might be an excellent way to express your appreciation and affection for the shadow side of life. 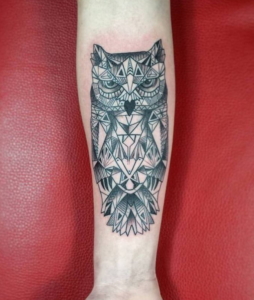 The wise old owl can be a very beautiful centerpiece or addition to any skin art. Besides being a trendy animal in decorating your body, the owl carries a variety of meanings and symbolism.

Owls are the sentinels of the night. They are infinitely comfortable with the realm of the unknown if you like that than an owl tattoo might be an excellent way to symbolize your comfort with mysteries lurking in the darkness.

In fact, the owl is an intensely sensitive creature. Most owls can’t bear exposure to light. Their eyes can’t take in full sunlight to capacity. However, that is okay as owl eyes are expertly equipped to handle the night’s darkness.

Owls are birds from the order Strigiformes. This order includes about 200 species of mostly solitary and nocturnal birds of prey. Typically, they have an upright stance, a large and broad head, and binocular vision. They have a binaural hearing, sharp talons, and feathers that are adapted for silent flight. Some of the exceptions include the diurnal northern hawk-owl and the gregarious burrowing owl.

Owls tend to hunt mostly small mammals, other birds, or insects as well. However, several species specialize in hunting fish. They exist in all regions of the Earth, except polar ice caps and remote islands.

There are two families of owls, and they are the true or typical owl family, Strigidae, and the barn-owl family, Tytonidae.  Owls possess large and forward-facing eyes and ear holes. They have a hawk-like beak, a flat face, and often a conspicuous circle of feathers. They also have a facial disc, around each eye.

The feathers making up this disc may be adjusted to sharply focus sounds from various distances onto the asymmetrically placed ear cavities of the owl. Most birds of prey have eyes placed on the sides of their heads. However, the stereoscopic nature of the forward-facing eyes of the owl makes them able for low-light hunting.

They also can’t clearly see anything within several centimeters of their eyes. This is because they are farsighted.

Nowadays, the owl is the symbol of wisdom, just like it was for the ancient Greeks. For them, the owl was a bird sacred to the goddess Athena. Additionally to this, Greeks traditionally associated it with its nocturnal hunting activity. People considered it the messenger of death.

Also, in cultures as diverse as the Algonquin Indians of North America, it was the conductor of souls. It had the same meaning in cultures like the pre-Inca Peruvian Chimu of South America and ancient Egypt.

As with many large birds, when it comes to the owl, tattoo artwork is sometimes lavishly detailed. Indeed, its quietly staring pose is maybe one source of its association with insight and knowledge. The owl, like other animals inhabiting the Pacific Northwest, found its use as a crest figure in different tattoo designs.

In certain Northwestern cultures like Haida, the owl symbolizes death and the souls of the departed. Particularly, it symbolizes the souls of their ancestors. This symbolism comes from its appearance at night with silent flight, making an eerie call.

The owl is a beautiful and quite meaningful tattoo choice for every personality type. Owl tattoos are not necessarily mainstream but popular. Both men and women wear them. Usually colorful and detailed, they commonly portray this bird alone. However, many people choose to include other elements and symbols.

Owls have come to symbolize a lot of things since ancient times. Archaeologists discovered the mummified remains of owls in Egypt and many other places. These birds of prey were depicted in the ancient Egyptian hieroglyphics too. That is why the owl is a very popular bird and was in the past too.

Some of the most common meanings and symbolism associated with this bird are the following:

Considering the rich symbolic history and colorful beauty of these tattoos, it is no wonder that they are very popular. Just like we already said, both genders wear owl tattoos. If you want something cute, you could include some symbol or element, or go with a cartoon design. If you are into something more serious, you could go for a fully-detailed realistic design.

Owl tattoos are a favorite among many people. They get them in all shapes and sizes, colors, and combinations. A lot of people choose to get an owl tattoo to symbolize something unique about themselves. Others want to send specific magic as well.

Regardless of what your purpose is, research well before you decides to get a tattoo. Do this in order to avoid hurting other people’s feelings, religious beliefs, or perspectives. Also, do this for yourself first, because a tattoo is something you will wear forever.