Frigg, also known as Frigga, which, when translated from Old Norse, means ‘Beloved’ is the highest-ranking of the Aesir goddesses found in Norse mythology. She is known as being the wife of Odin, the leader of the gods, and the mother of Baldur. As a deity, Frigg was worshiped as a sky goddess and is believed to be responsible for weaving the clouds. Moreover, the Norse believed that she had the power of prophecy and was in charge of weaving the fates. Love and marriage were also in the domain of this powerful goddess. As an interesting aside, the English weekday name ‘Friday’ is etymologically derived from the name of this goddess.

Besides the fact that Frigg was possibly the most important goddess in the whole Æsir, there isn’t much information about her in the surviving primary sources on Norse mythology. This goddess is considered as not unique, and this comes from the fact that she has some common attributes with Freya, a goddess of the Vanir. For instance, both goddesses are related to love and marriage. Moreover, they are both believed to have evolved from an earlier Germanic goddess recognized as Frija.

Frigg, Goddess of Many Concerns

When we talk about Frigg, she oversees marriage approved by society, while on the other hand, Freya’s domain is that of illegal marriages. This is the reason why Frigg is also considered as a protector of the home and families.

Being the ‘Queen of the Æsir’ made Frigg serve as a role model for her female followers, and the hearth is within her realm. The goddess is often asked by her devotees to assist in the household arts and cottage industries, in particular the spinning of wool. The Norse people believed that this is also an activity that the goddess herself is involved in. It was believed that the Norse goddess used the wool of the cloud sheep to weave and spin Æsir garments.

This deity was also responsible for maintaining peace and the upholding of social order. She was also recognized as the ‘Lady of the Hall,’ whose obligation it was to carry the mead horn around feasts that were organized to send off or welcome back warriors. This connection with feasting is the reason why she was considered as a patroness of diplomacy, and she was asked for advice by leaders in such matters.

In addition to this, as myths about her are closely associated with her son, Baldur Frigg may also be considered as a paradigm of motherhood for her followers. According to the Norse people, the longest night of the year is known as ‘Mother Night,’ whose name comes from the belief that this was the particular night during which Frigg gave birth to Baldur, who later become the god of light and joy.

Norse people also believed that Frigg has the gift of prophecy, and this particular gift helped her foresaw the death of her beloved son. Sadly, the goddess was unable to change Baldur’s destiny.

Still, she did everything in her power to keep Baldur safe. The Norse mythology claims that the Queen of the Æsir visited all things that might be dangerous; the elements, the environment, diseases, animals, and even the stones, amongst other things to beg them not to harm her son. The only thing the goddess missed was the mistletoe since, according to her, it was too irrelevant, and it would not hurt Baldur.

Loss of a Son 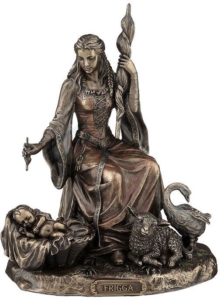 In the end, the gods decided to create a game for Baldur, which implicated throwing all sorts of things at him, thinking that nothing could hurt him. This gave the opportunity to Loki to kill the popular god. In order to fulfill his intention, he made a dart out of mistletoe and gave it to Hodur, Baldur’s blind twin. Loki told Hodur that the reason he is giving that to him is to help him play Baldur’s game, and with the trickster’s assistance, the blind god threw the dart at his brother. Because Frigg did not require the defense of the mistletoe, the dart pierced Baldur’s heart, and he died.

As her last attempt to save her son, Frigg decided to send a representative, Hermodr, to the Underworld to bargain with its ruler, Hel, for the payment of Baldur. Hel permitted the release of Baldur from her domain, with the only condition that all creatures weep for him. Frigg was almost successful in achieving the universal weep, but for the exception of one creature, a giantess by the name of Thökk, for whom some believed that was Loki in disguise. Due to that, Baldur was lost forever.

One more interesting element that frequently appears in Frigg’s stories is associated to the handmaidens, who are also goddesses, who escort her in the palace of mists called Fensalir. Only three are named as Frigg’s favorites – Lin, Fulla, and Gna of all 11 goddesses who are seated nearby while Frigg works away at the jewel-covered spinning wheel.