Sphyrnidae is the family group of the hammerhead sharks. These families of sharks are recognized for the unusual shape their heads are formed. The name of these sharks comes from the hammer-like shape that this particular shark was born with. There is a good reason why the heads of these sharks have this shape. They use this shape to their advantage when swimming in the water, hunting its prey, and even using sensors for guidance. 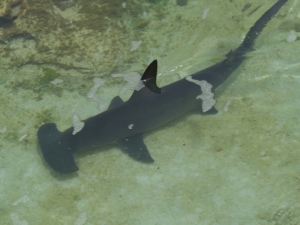 Because these animals have a smaller mouth than what their bodies should allow, they are usually seen hunting from the bottom. Even though they swim in a pack, they often hunt on their own. The hammerhead sharks are 20 million years old and will always mystify and astonish those interested in the animals. Not only is the hammerhead shark unique, but it is also part of the rare species list. Below are examples of hammerhead shark tattoos, different designs, placements, and symbolism that people tend to get.

Across the world, people have different views when it comes to the image of a shark. Not only does this fierce water beast look intimidating and horrifying, but it also has much more symbolism behind it than what the horror movies like to portray. The Celts had the most realistic view about these creatures- an extremely well hunter that was both smart and strong. This is why the Celts used the dorsal fin of a shark to symbolize a successful hunt, harvest crops, and survive. After all, the sharks are on the top of the food chain and ruler of the waters. On this planet, there are over 400 different species of sharks. However, the hammerhead shark is different from any of them, so it carries its special symbolism.

For the very long time that people have been in contact with hammerhead sharks, no recorded fatalities result from these animals’ attacks. Hammerhead sharks never attack without reason, making them not as dangerous to humans as some of the other creatures of the sea. Moreover, sailors and swimmers often decide to get the hammerhead shark tattoos as a talisman or good luck charm. In this sense, they believed that the hammerhead shark protects them from dangerous sharks and animals that may harm them while they were out in the waters.

If you want to improve your hammerhead shark tattoo, you can add a shark tooth as an image to accompany the main one. Since always, shark teeth have been recognized as a symbol of strength. The big and powerful teeth of the shark are what makes the animal so treacherous. Not only does the shark tooth tattoo symbolize strength, but it tells all that a shark is. Sharks are carnivores, and when it comes to water animal life, they are at the top of the food chain. This is why they are also very good at looking for refuge. They are capable of adapting to their environment and have a good sense of guidance. This can all be shown when a tattoo of a hammerhead shark and a shark tooth are combined.

When we discuss these tattoo designs, different ideas can be used. If you want to get a tattoo that will attract a lot of attention with your tattoo, you can get a detailed hammerhead shark surrounded in its natural habitat of water. Some people are interested in the idea of the hammerhead shark in a violent, action pose. Other people decide to keep the hammerhead shark just swimming along.

It is vital to make sure that there will be enough space for everything you want to include in the design.  If you’re going to get a hammerhead shark with a full underwater scene, you probably plan to have somewhere with a fair amount of space on your body. These kinds of tattoos look great in color. Shades of blue, red, grey, and black are some of the colors that fit in this theme, especially if you want this piece to be flashy and stand out from the rest.

The hammerhead shark tattoos don’t have to be complex. If you are interested in a more simple design, you can choose to get the outline of the hammerhead shark, filled with dark bold tribal lines that make this design both complex and simple at the same time. A bonus thing when it comes to the shark tattoo in the form of the classic tribal style is that you can have it in any size you want it. If you are creative enough, you can make patterns within the shark frame, which is a cool way to make this tattoo unique.

No matter what kind of design and graphic for your hammerhead shark tattoo, it is one that is worn by few and has a very creative sense about it. As a symbol, the hammerhead shows that you fight for yours, and you have a confident attitude on life. This image demands power and urgency always to move forward.