Home
Tattoo History
Heimdall: The Watcher Of The Norse Deities Of The Aesir

The watcher of the Norse deities of the Aesir tribe was Heimdall. Heimdall was known as a god of keen eyesight and hearing who was prepared to sound the Gjallarhorn at the beginning of Ragnarök. There is only a little evidence that survived, and according to that, Heimdall appears to have been a guardian of the deities and a guardian of the passages to and from the Nine Worlds. For his supposed role in yielding wisdom and social order, he was also considered as a father and patron to human beings.

He had teeth of gold and was said to have had nine mothers, sea giants from among the jötnar. These multiple mothers were likely a reference to the Nine Worlds over which he kept watch. In any case, Heimdall appears to have been associated with the sea, gold, roosters, and rams.

The etymology of the name “Heimdall” was uncertain; however, it seemed to be produced from a combination of words meaning “world,” “eminent,” and “radiant.” If the name is translated, it means “radiant world.” An additional potential translation of the name could be “the one who illuminates the world.”

There were many epithets attached to Heimdall’s name, such as Hallinskidi, meaning “the horned,” which is probably a reference to his connection with rams. He was also called Gullintanni, meaning “the one with the golden teeth” or simply “gold-toothed,” and Vindlér, meaning “the turner.” In one eventful story, he also took the name Ríg, or Rígr.

Associated with his status as a watchman, Heimdall owned the keenest senses of sight and hearing among all the gods. In the Gylfaginning, a book of the Prose Edda that was written by the thirteenth-century Icelandic scholar Snorri Sturluson, it was claimed that Heimdall required less sleep than a bird, could see in the night as though it were day and could spot a target from a hundred leagues away. In addition, his sense of hearing was said to be so sharp that he could hear the grass grow and wool sprout from sheep.

Heimdall owned a horn called the Gjallarhorn that he carried with him, meaning “shrieking horn” or “loudest horn.” The prophecies claimed that when Heimdall spied the events signaling the start of Ragnarök, he will blow the horn with a loud shriek so piercing it would be heard in all worlds, bringing the Norse gods together for the final battle.

The heavenly guard rode a golden-maned horse called Gulltoppr (suitably “the golden-maned”) and lived in a castle in the clouds recognized as Himinbjörg (“the castle of the heavens,” or “sky castle”). Himinbjörg stood at the Asgardian end of the Bifrost, the rainbow bridge that linked Asgard, the world of the gods, to Midgard, the world of humans.

Heimdall was born as the son of nine maiden sisters recognized as the Nine Undines or the Nine Waves. This is possibly the reason he was born with so many gifts. The nine sisters were known to be both gorgeous and awful. Their names stood for the diverse powers of the ocean. The two oldest sisters were twins, known as Duva, the Hidden One, and Kolga, the Cold One. The next sister is Blodughadda, the red-haired and cruel sister. Her name symbolizes red sea foam. The next one is Bara, whose name stands for foam fleck, suggesting the moment that a wave hits the shore. Bylgja, whose name means billow, or breaker, is next, followed by Hrǫnn, or welling wave, and she had a twin Hefring, standing for a rising wave. The last ones were Unn, meaning frothing wave, and the youngest Himinglava, standing for a transparent wave.

The father of Heimdall is Odin, the king of the Aesir tribe. According to a legend, the love between the nine maiden sisters was like no other. Their union was firm. As a result, when one of them decided to lay with Odin, in opposition to the wishes of their father, Aegir (the god of the sea), the other eight sisters stood by her to cover up her disobedience. 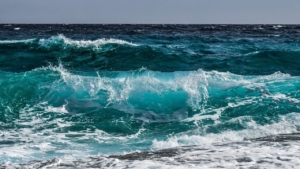 There is one more theory about several mothers of Heimdall. Some suppose that Odin bedded all nine of the sisters. This option would have been quite brave on his part, bearing in mind that the maidens were nine vicious mermaids. Either way, at least one of them gave birth to Heimdall.

Heimdall is considered as the father of all people. Before he was given the responsibility of being the watchman of the Bifrost, he traveled the world, visiting a variety of married couples. His stay with each couple lasted for three nights. The first couple were serfs, the next were poor farmers, and the last couple was the aristocracy. Nine months after each visit, a child was born.

I hope that you’ll find some symbolism here that can help you create your tattoo design. Until then think before you ink?