There are numerous ways in which pocket watch tattoos can be done. These designs can reveal an unbelievable amount of symbolism and meanings. For most of us, time is a fundamental and important aspect of life. Time is among those things in this world and universe that are constant. We as humans see things as constantly moving forward, and that is the particular way we look at time. With the passing of every minute, hour, day, and the week we get older and closer to the end of our times in this world. For every human, time can mean something different. The only thing that is clear about time is the fact that we all have a specific amount of time for accomplishing certain things. The meaning of time is considered as the most significant thing on this earth.

Since the moment it was first invented, the pocket watch has been part of history. It appears as if when the pocket watches were introduced, every person had to have one. This invention was such an advance since people did not have to run to a particular area of town to be able to see what time it was, but instead, the only thing they had to do was to reach in their pockets and pull out the tiny clock. Very often, these handheld clocks would have some sort of chain attached, which made holding onto the clock a lot easier. This chain not only helped in making the clock easier to hold onto, but it also made it more secure not to get lost. The chain would be attached to a belt loop of the pants or any other piece of clothing it could be attached to. In this way, the pocket watch could be caught by the chain in case the watch slipped from the pocket, avoiding the smashing or losing of the watch. Even though not every person had a chain for their pocket watch, if you decide to get the pocket watch tattoo, the chain adds to the creativity and symbolism of the design.

Whenever you think about a pocket watch, you normally visualize a chain attached to the device. If you are getting a tattoo of a pocket watch, there is a huge chance that you know a little bit about them already, and you’re familiar with the importance of the chain. The chain serves for the security of the watch. It provides the comfort of knowing that if your watch accidentally falls or someone tries to pickpocket you, that the chain will prevent such events from happening. With this knowledge, adding a chain to your pocket watch tattoo can symbolize much more than you presume. If you add a chain in your design that not only shows that you take care of your precious items, but it also proves that you take that extra step to make sure that your ownership is safe. It also adds a sense of superiority to the overall feel of the watch. Moreover, the chain adds a touch of sophistication and suggests that you are not going to risk losing such a significant piece.

There is no better reminder that death is around all of us than time. In the world of tattoos, skulls and skeletons are some of the most popular items for tattoos, and every person that gets them has a different reason for doing so. According to some people, having skulls and pictures of the grim reaper protects them from evil spirits and are very useful in keeping our spirits protected. Having in mind the fact that time is always pushing us to our last breath, one way to get your pocket watch tattoos to represent this is by combining it with a skull or grim reaper. This idea can be done in many different ways. One option is to have the skull or reaper inside of the watch itself. You are free to add skeleton hands, or a scythe, to the watch by using the bones for the hands of the clock. This image of a skull or reaper on the inside of the watch helps you highlight the importance of time. Another great and detailed idea would be to have a skeleton or hooded grim reaper figure holding onto the watch itself. This suggests that your time is up, and the reaper is here to take you to your endless slumber. 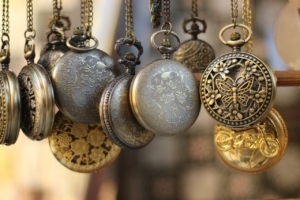 Spirals and swirls go perfectly together with the idea of time. The reason for that is the spiraling effect that time has on its own. Looking back at the past, it seems as if our memories have spiraled out of control over the years, wondering where time has even gone. It is a lot easier to represent this in a tattoo than it sounds. There are several possibilities of how we can graphically represent this. One option is to have spirals inside of the face of the clock itself. Pointing the arms of the clock at whatever time you would like but just beyond that, the swirls will form, giving the effect of time spiraling out of control, taking you to a different time and dimension. This idea is most popular amongst fans of science fiction. Another option is to have the watch displayed on top of a spiraling background. The watch might even be upside down, representing the loss of time.

The obvious message conveyed through this tattoo is time. However, pocket watch tattoos can also symbolize a child’s birth, a parent’s passing, a refusal of the conventional conception of time, or an imprecise sense of time. Before you choose your pocket watch design, you need to carefully consider your perspective on time itself.