Tattoos based on religion are very common nowadays. Christian tattoos, for example, can come in different sizes and shapes. They can be cross, Jesus, a quote from the Bible, famous paintings related to the Christian religion or some other religious ornament. An enormous population of the world describes themselves as Christians. Some of them take their faith very seriously, so they would like to put it forever on their bodies. They often do that through Christian tattoos. And, that is definitely something awesome. 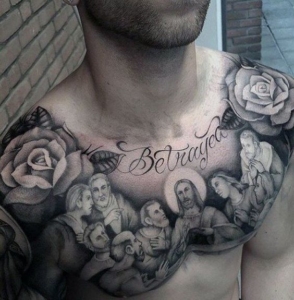 Although many people believe that Christians are quite serious and maybe boring people, they can be pretty fun too. And they would like to, just like anyone else, to express themselves freely through tattoos.

Christian tattoos help to destroy the old-fashioned idea that tattoos are just for bad guys. We have to thank Christians for that too.

If you are a Christian and you find tattoos attractive, there are several things you have to take into consideration:

Here, we are going to talk about one tattoo related to this religion, which is the Last Supper tattoo design.

The Last Supper represents the last meal that, in Gospels, Jesus shared with his Apostles in Jerusalem before his crucifixion. The other name of the Last Supper is the Passover meal. Christians commemorate the Last Supper, especially on Maundy Thursday.

The image provides the scriptural basis for the Eucharist, which is famous as The Lord’s Supper, or Holy Communion. The First Epistle to the Corinthians, in fact, contains the earliest known mention of the Last Supper.

The four canonical Gospels state that the Last Supper happened towards the week’s end, after Jesus’ triumphal entry into Jerusalem. Then, he shared a meal together with his Apostles shortly before his crucifixion at the end of the week. During this meal, Jesus predicted the betrayal of one Apostle. He also foretells that before the next morning, Peter will deny knowing him.

The term “Last Supper” doesn’t really appear in the New Testament, but traditionally many Christians refer so to the event. A lot of Protestants use the term Lord’s Supper, stating that the term “last” actually suggests something else. They say that the term “last” indicates that this was one of the several meals and not the meal. However, the second term refers to the biblical event. It also refers to the act of “Holy Communion” and Eucharistic celebration within their liturgy.

Evangelical Protestants use the second term, but most don’t use the term “Eucharist” or “Holy” when they use “Communion.” Eastern Orthodox Religion uses the term “Mystical Supper,” which refers both to the biblical event, and the act of Eucharistic celebration.

In it, Jesus Christ meets with his twelve disciples for Passover, just before its execution. The symbolism in the image has various layers and reflects many of the basic Christianity’s tenets. However, it especially expresses the institution of the sacrament. It is a ritual where believer consumes the body and blood of Jesus in the form of wine and bread. This expresses their communion and unity with Jesus Christ.

One of the reasons people choose to get this tattoo is because of the iconic and spectacular artwork that it is. Leonardo da Vinci pained the beautiful image during the 15th century. It still takes its place as one of the most identifiable images in the world.

Another reason people will choose to get this tattoo would be because of the courage of Jesus Christ.  This courage actually refers to the courage he showed during the Last Supper. This meal was the chance to expose the betrayal, and he was able to stop everything that was to happen. However, he had the courage to let the betrayal happen so that he could die on the cross for the sins of man.

This is why other people will choose to get this tattoo. Many people respect the courage that Jesus displayed during that period. Because of this, they get this honorable gesture tattooed on their skin in the form of the Last Supper. Many people will also choose this image in order to show incredible strength.

Regardless of your reasons for getting this tattoo, it will be an impressive design to get. It is going to impress all that see it. It is not just a beautiful image, but it will also send a message and evoke emotions among people. People often get the tattoo as a full scene or get parts of the religion scene too. Every person that has this tattoo design probably loves it and shows it off to family and friends.