There are many reasons why people decide to get tattoos. Some people get it just for its subjective meanings, while some get it just for fun, to look cool. There are a large number of tattoos and tattoo designs with a numeral theme. One of those popular themes is the number three design. Even though it is not the most trendy tattoos style, but still, it is not hard to see people inking numbers on their skin. In many cultures, each number has a different significance. However, it is not just all about different numbers and their importance.

Often, people tattoo their or their loved ones’ date of birth or any number that has special meaning on the skin. Tattoos with numbers are trendy among those who believe in numerology. Sometimes, there is a possibility of the number of tattoos to be employed with another element or symbol. There are so many different approaches for you to design your tattoo. The options are merely limitless. Nowadays, Roman numeral tattoos are very popular.

Numerology is very useful when you want to add symbolism to your tattoo design by having a certain number of a specific element in your tattoo, or even by adding in the number itself.  Each number holds individual power, which is expressed both by its symbol to denote its representation and by its connection to universal principles since numbers have relationships with all things in nature that make them powerful symbolic expressions. 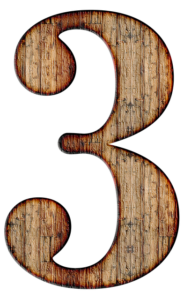 Numerology represents the study of numbers and their influence on our lives.

Number three as a tattoo design:

Undoubtedly, number three is the most symbolically significant of all the other numbers. In Hinduism, the appearance of the godhead is threefold as Brahma, Vishnu, and Shiva, while in Christianity, it shows the perfection of the divine unity of three persons into one God. In Buddhism, there are the Three Jewels of the Buddha, the dharma, and the sangha. We can also look to the essential aspects of life, such as past, present, and future, or body, mind, and spirit, or even birth, growth, and death.

According to the spiritual meaning, this number deals with magic, intuition, fecundity, and advantage. The number three refers to expression, versatility, and the pure joy of creativity. Three is also a time accessory since it represents Past, Present, and Future. As a consequence, threes can symbolize the need to express yourself creatively or consider your present directional path concerning past events and future goals. Three can also represent promising new adventures. Three most often symbolizes reward and success in most undertakings.

The third dimension – things are done in threes so they will appear in our physical realm. Its roots stem from the meaning of diversity. Three stands for creative power and growth. Three represents the movement forward of energy, overcoming duality, expression, manifestation, and synthesis. This number is the first number accustomed with the meaning “all.” The reason for that is because this number represents the Triad as it contains the beginning, middle, and end.

Number three has universal powers, which are the tripartite nature of the world as heaven, earth, and waters. It is human as body, soul, and spirit. There is a significant difference between soul and spirit, and they are not the same. Three stands for birth, life, death. In the circle itself, this number is the beginning, middle, and end. It means the past, present, and future. The triangle stands for the number three since it is its symbol. The interwoven circles of number three or triangles can symbolize the eternal unity of the three persons of the trinity. Other symbols use this, and those are trident, fleur-de-lis, trefoil, trisula, thunderbolt, and trigrams.

The number three is strongly connected with the astral or emotional since the body stays connected to the body for the whole three days after death. It is scientifically proven that the brain, even when all other systems are failing, takes three days to register complete shutdown.

There are 3 phases to the moon. Lunar animals are often depicted as three-legged.

Three represents a heavenly digit, which stands for the soul, as four represents the body. Together with the two equal seven (3+4=7 ) and form the sacred hebdomad. The 3×4=12, and that represents the signs of the Zodiac and months of the year. Pythagorean three means completion. Furthermore, there are three wishes; genies have three wishes, three leprechauns, three prince or princesses, three witches, three weird sisters, among others.

These are some of the meanings and probably the particular reasons why people decide to get number three as a tattoo.

Batman Tattoo: Comics, Books And Movies In The Tattoo Culture

If you are a fan of superheroes, there