When talking about vintage maritime symbols, the mermaid stands in the first place, when it comes to tattoos. This old-school tattoo design became popular for the first time among sailors in the early 1900s. Together with keeping with its roots, the mermaid tattoo designs also include some other nautical symbols like ships, nautical stars, anchors, and starfish.

Swimming through the Seven Seas, as well as charming men with their siren songs, mermaids were the subject of legends, myths, and beauty for a long time. Ranging across various cultures, there is plenty of meaning and symbolism found within the body of the mermaid. They are much more than only a pretty face. 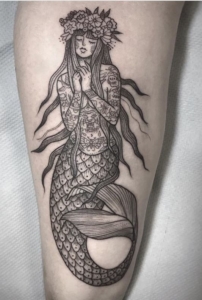 In fact, various cultures did not even believe them to have pretty faces at all. They usually represent temptation, danger, duality, and sensuality. The history and the meanings behind the aquatic folk are as profound as the oceans themselves.

If you are thinking about getting a mermaid tattoo, you should continue reading and see what they symbolize.

In folklore, mermaids are aquatic creatures with the head and upper body of female humans, and fish’s tail. Mermaids appear in the folklore of various cultures around the world. Such cultures are Near East, Asia, Europe, and Africa. The first stories appeared in ancient Assyria. Here, the goddess Atragatis transformed herself into a mermaid out of shame for accidentally killing her human lover.

Sometimes, mermaids find their associations with perilous events like floods, shipwrecks, storms, and drowning. In other folk traditions, they can be beneficent or benevolent, bestowing boons or falling in love with human beings.

The male equivalent of the mermaid is the so-called merman, also a familiar figure in folklore and heraldry. Even though traditions and sightings of mermen are less common, they definitely co-exist with their female counterparts.

The Sirens of Greek mythology probably influenced some of the attributes of mermaids. Manatees and similar aquatic mammals probably inspired the historical accounts of mermaids. While there is no evidence that they actually exist outside folklore, reports of mermaid sightings continue until nowadays. This includes the examples from this century from Zimbabwe and Israel.

Mermaids were quite popular subjects of literature and art in recent centuries. One such example is the well-known fairy tale of Hans Christian Andersen, called “The Little Mermaid,” from 1836. They are a common depiction in paintings, operas, books, as well as comics and films.

The mermaid definitely represents an age-old story of feminine power. Sometimes, they emerge from the water to lure men to their deaths, while other times to act as their rescuers.

Half-woman, half-fish, mariners used these popular images as symbols of temptation. However, others are variations of the pinup girl tattoo, while others represent the call of the sea.

Mermaids are often strong female figures, figures that are free, self-directed, and independent. Because of their connection with the sea, this tattoo design may symbolize intuition, nature, creation, birth, or rebirth. As they are usually depicted as luring sailors, they might represent seduction, danger, and sexuality.

Moreover, they may represent independence, mystery, freedom, a connection to the ocean, going with the flow, etc. According to some beliefs, mermaids also represent magic. Mermaid tattoos with mirrors can symbolize self-worth or self-value.

Overall, mermaid tattoos represent everything about females. Below are some more associated meanings:

Moreover, mermaids are symbolic of sensuality. Nowadays, many people love this tattoo design because of its feminine pinup qualities.

Mermaids are often pretty, with long and flowing hair, and jewel-tone colors. Most of them portray slim, young, and long-haired half-woman. However, you can go against this tradition and choose any size, age, shape, or color you want.

Many people portray mermaids as seductive figures with an enticing look on their face or a suggestive posture. They can be present with other maritime symbols like nautical stars, ships, anchors, or tropical flowers. Some tend to depict them swimming through water or also sitting on rocks. They might be topless or may have shells or long and flowing hair that covers their breasts.

You can depict them realistically or portray them as cartoon characters such as Ariel from “The Little Mermaid.” You may also see mermaids holding fishbone combs, which is the ancient symbol of feminine strength and power.

Moreover, you can portray them with mirrors, which is the association with the moon. Mermaid tattoos may also portray a mermaid watching the moon or sitting on a rock in the moonlight. Sometimes, we can see evil mermaids represented too. Usually, these mermaids have fire red hair or scales. You can portray them with their hair blowing up or around their body like flames. They can also be with an evil expression on their faces.

There are many mermaid tattoo variations you can choose from. Choose wisely in order to make it fit with your personality.