Over the last few decades, tribal tattoos have been considered as some of the most popular tattoos. The reason for that is the fact that tribal tattoos cover a wide range of design styles and cultures Fijian tattoos amongst them. These tattoos are bold and meaningful, and that is why people often decide to get one of them, even those who live nowhere near Fiji. Just like in the case with most other Polynesian tattoos Fijian tattoos are often used to tell a story. These can be some very personal stories or they can be a representation of the wearer’s culture.

The most common symbol that is used in the Fijian tattoo designs is the shark tooth. This comes from the fact that shark teeth symbolize quite a few things in Polynesian cultures, such as power, leadership, and protection. Some people decide to make the shark’s tooth the main focus of their designs, but in most cases, you will see several shark teeth surrounding another piece.

Another commonly seen symbol in Fijian tattoos is the spearheads and for good reason. Not only they can be pleasant to look at when done properly, but they also hold important meanings to their owners. It’s a good idea to incorporate spearheads in your Fijian tattoo if you wish to demonstrate that you are a courageous person or if you want to get a symbol that reveals that you have the bravery or you want to be brave. 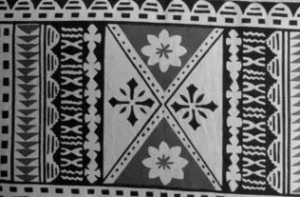 The sun is another Fijian tattoo symbol that plenty of people like to include in their designs. Even though a lot of people include the sun in their tattoo designs, in the case of Fijians it symbolizes motivation for perfection. It also represents rebirth, which is an exceptional meaning to use if you are trying to turn your life around and keep it that way.

The lizard is the most popular animal in Fiji. More particularly, the gecko is seen as awfully significant and is included in a lot of Fijian tattoo designs. It is believed that the gecko has a direct association with the afterlife. This is why it serves as a symbol of good luck and knowledge.

Taking into consideration the origin of these designs, it is not surprising at all that a lot of Fijian tattoos have shells in them. One fact that is very interesting about Fijian shell designs is that they all represent the same things regardless of what type of shells they are. Shells can symbolize peace, health, and fertility, as well as many other things.

Other popular designs in Fiji culture are the Tiki tattoos. These tattoos stand for semi-gods, and they themselves hold so many different meanings. Most often, Tiki designs symbolize some type of defense, but it’s essential to know the specific semi-god that is part of your design so you have a better understanding of what they symbolize. Different then most of the other Fijian tattoos previously mentioned, the Tiki is often used on its own, though it’s not completely uncommon to see a Tiki as part of a larger Fijian design.

Most often Fijian tattoos are done with bold black lines that create an outstanding design on the skin. The way in which these tattoos are designed makes them look as if they were always on the wearer’s skin. There is one thing about Fijian tattoos that a lot of people don’t realize and that is the fact that they rarely have any color in them. This is a great thing for most people, however, for some people that is disappointing because they always wanted to get a colored tattoo. Obviously, you are free to add in some color in these designs, but it could take away from the genuine Fijian look that a lot of people want.

These tattoos look really great as sleeve tattoos, but they can also look amazing as back tattoos, leg tattoos, or even as upper-arm designs. The most important thing that will make you get a Fijian tattoo is that you can include a lot of distinctive images into a single design, which is only one of the reasons why these tattoos have been so popular in recent decades. For instance, you can start by choosing one key symbol to incorporate in your tattoo and then work to find a way to combine it with other Fijian tattoos that will allow outsiders to have a better understanding of who you are as a person.