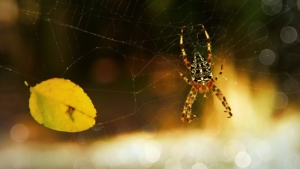 Nevertheless, in modern times, the spider web tattoo has become associated with positive meanings too. This tattoo has a rich history and we will take a closer look at this popular tattoo symbol.

History of the Spider Web Tattoo

Although the spider web tattoo can be used to symbolize time spent in prison, there is a much darker history to this tattoo then most people are familiar with. This tattoo was also a symbol of white supremacy groups. They were inked on the elbows to symbolize their loyalty to their group. Spider web tattoos gained popularity in prison systems all across the United States during the late 1900s. Even nowadays, the tattoo is still a popular prison tattoo. But in the late 1970s, to wear such a tattoo would come at great cost. Many white supremacy groups had rules when it came to the spider web tattoo. Some groups required that you would have to kill a minority before you could wear such a tattoo. This link has given the tattoo a negative perspective, and rightfully so.

Even though this tattoo has been viewed as a symbol of prison and racism, in modern times, it is not as negative. In fact, the tattoo can be associated with several positive meanings. When you take a moment to view the piece, it is truly a work of art. It is almost like the web’s creator is an engineer. Only then we can find the true meaning surrounding all the negativity behind the spider web tattoo.

So, the spider web tattoo can symbolize both positive and negative meanings. If you are thinking about getting one, you should be aware of how it will be viewed by others. The public’s perspective is negative and probably will be for years to come. We shouldn’t judge someone for wearing this tattoo though, because it doesn’t mean that they are a racist, criminal, or a former inmate. These days, the tattoo is appreciated for its true value as a popular tattoo symbol and it should. But even so, if you choose this tattoo, don’t be surprised if you are labeled. This is something you have to take into consideration.

The spider web tattoo can represent both positive and negative meanings. It is important that you learn and fully understands all the meanings behind this design. Here are some meanings and symbols associated with the tattoo.

As previously mentioned, it is very important to know what this tattoo can stand for and represent. It may take decades, if not longer, for the spider web tattoo to shake such negative associations or it is possible that it never will.

Besides spiders, there are a few different symbols that can be considered. Since they are usually inked on the elbows, someone may consider getting a star inked on the ball of the elbow. You could use a few different symbols, such as a heart, diamond, or a skull. Starting with the fact that these tattoos are often viewed as a dark symbol, such tattoo designs may include graves, vampires, or other Gothic symbols.