The Aryan Brotherhood, which is also known by the names the Brand, Alice Baker, One-Two or the A.B., is actually a  Neo-Nazi prison gang. They are organized crime syndicate in the United States, which is nowadays the largest one with an estimated 15,000 – 20,000 members in and out of prison. It originated in 1967, founded by Irish bikers at San Quentin prison, California, as a form of protection for white inmates in newly desegregated prisons. It is essentially a gang that espouses white supremacist ideology. It is also the oldest major prison gang. 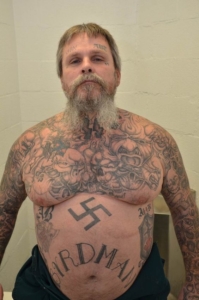 According to the Federal Bureau of Investigation, the Aryan Brotherhood makes up an extremely low percentage of the entire U.S. prison population, but it has the responsibility for a disproportionately large number of murders in prisons.

The gang focuses on the economic activities which are typical of organizes crime entities especially drug trafficking, extortion, inmate prostitution, as well as murder-for-hire. Organization of its whites-only membership varies from prison to prison, but it is, in general hierarchical, commanded by a twelve-man council protected by a three-man commission. The group has an association with Aryan Nations and several alliances and rivalries with other prison gangs.

Their motto is simple – “blood in, blood out.” Their tattoos can typically identify members of the Aryan Brotherhood. The Aryan Brotherhood uses different images in order to identify themselves, and some of the popular tattoos among A.B. members include a shamrock inscribed with the number 666, swastikas, the abbreviation A.B., and double lightning bolts, which stand for Hitler’s S.S., as well as Celtic and some other symbols.

The tattoos can also vary in other terms, and some of them may include different combinations, such as daggers, hearts, and ribbons which spell out their beliefs such as “white pride,” or that also identify their state of origin.