Home
Tattoo History
Santa Muerte: The Goddess Of The Underworld

People around the globe believe that there are anywhere between 2,000 and 10,000 saints. However, among all these saints, only some are remembered and celebrated, while others have fallen by the wayside along the course of history. Santa Muerte, also popularly known as Saint of Death, is a Mexican saint that represents a world-known symbol of death and dying. She serves as a figure very much like the ancient Greek Hades, the God of the Underworld. This saint has a long and rich history as a being of religious importance, dating back to long before the Spanish conquests of North and Central America.

A variety of cultures have sought to personify death in dissimilar ways, from the Danse Macabre of the Middle Ages to the Day of the Dead of modern-day Mexico and other areas within the Americas. Death has been given many faces in different ways.

Santa Muerte is recognized as a female deity that comes from the Mexican-American culture. This saint has gone from relative anonymity to being at the very center of the largest and fastest-growing religious movement in the world. Her believers that vary from drug lords and prisoners to hard-working families often call her Santisima Muerte, which, when translated, means “most holy death.”

The chief annals of the Catholic Church, the Vatican itself, have damned Santa Muerte as satanic. But this hasn’t stopped her followers from every corner of the earth to bowing at her altar.

The History of Santa Muerte

Even though she has only being recognized as a popular figure in the last 10 to 15 years, Santa Muerte, who’s name is translated as “Saint Death,” has been present around for centuries.

Andrew Chesnut, who is the Bishop Walter F. Sullivan Chair in Catholic Studies at Virginia Commonwealth University, relays that references to Santa Muerte begin as early as colonial Spain. As the Spaniards sought to turn the Aztecs and Mayans over to Catholicism, they introduced them to female Grim Reaper figures as a depiction of death. But these native cultures already had death deities.

Previous to the coming of the Spanish conquistadors, the Aztecs who settled in the area that is now known as central Mexico worshiped Mictecacihuatl, also recognized as the “Lady of the Dead.” This pre-Columbian goddess of death was the ruler of the Underworld and was often depicted as a part skeleton or having a skull for a head, very similar to Santa Muerte.

It’s no accident that the modern “Bony Lady,” as her worshipers occasionally refer to her, is often represented holding a scythe. Catholic missionaries brought figures of the Grim Reaper to the new world them as their embodiment of death, and its possible the figures of the reaper and Mictecacihuatl blended to become Santa Muerte.

And so, as was the case with the spread of Catholicism all over the globe, the new religion from Rome did not entirely uproot and replace the beliefs of the local populations but rather blended with them. Some theories posit that Santa Muerte is also the result of one of these religious mixtures.

Disagreement appears to also be an embedded feature of the dead saint’s history as well. As long ago as the Spanish Inquisition, inquisitors recorded destroying a shrine dedicated to her in Central Mexico.

Santa Muerte largely vanished from written history until well into the 20th century. Even though there are a few references that are connected with her from the 1940s to the 1980s, it wasn’t until the beginning of the drug wars in Mexico that Santa Muerte’s fame began to take off.

The first modern place of worship dedicated to Santa Muerte was opened in the Mexico City barrio of Tepito in the year of 2001. Over the next dozen years, the sect who worshipped the skeletal figure would gain between 10 to 12 million believers all across Mexico, Central America, and the United States, while at the same time making it the fastest-growing religious movement that ever existed in the world.

The Saint of Death’s Worshippers

Santa Muerte’s rise in popularity at the same time as the death toll from the drug wars was rising in Mexico over the last 15 years. There is a great chance that these two events are not isolated, since, as one priest claims, “a lot of followers who feel like death could be just around the corner probably because they’re narcos, possibly they work in the street, maybe they’re security guards who might be gunned down, and they ask Santa Muerte for protection.”

The Bony Lady, as she was known, has gained something of a reputation as a “narco-saint,” a patron for the drug lords who so commonly deal in death themselves. The men who are considered to be some of the worst elements of Mexico’s criminal Underworld are some of the saint’s strongest followers. For narcos and thugs attempting to settle their lifestyles with their religion, Santa Muerte is the just-right object of their devotion.

Catholicism that was so deeply embedded in the Mexican was the reason why even the majority of the toughest criminals to be a bit anxious, invoking one of the traditional saints to assist with their unlawful activities.

According to the explanation that Father Andres Gutierrez gave to one Catholic news organization, “If someone is going to be doing something against the law, and they want to be sheltered from the law enforcement, they feel uncomfortable asking God to save them from harm. As a result, they promise something to Santa Muerte, and in exchange, they expected to be protected from the law.”

In reality, the criminals and narcos were not the only ones who worshiped and asked for help from Santa Muerte. She has also found worshipers among inhabitants of Mexico’s poorest communities, single mothers, and homosexuals; in other words, people who have found themselves on the margins of society and feel like they have been ignored by the church.

“Unlike the Catholic Church or the evangelical church, death doesn’t discriminate. She takes all comers,” further explains Chesnut, author of the first significant English-language book on the Santa Muerte phenomenon.

Condemnation by both Church and State

Although a lot of the people who pray to Santa Muerte are also Catholics, the sect has one very influential and vocal enemy, and that is the Vatican.

According to the declarations of the Italian Cardinal Gianfranco Ravasi, the adoration of the Bony Lady “is the festivity of destruction and hell.” For Catholics, Death was the final enemy who was overpowered by Christ, and so to pray to an embodiment of death rather than to one of Christ is considered a twisting of the faith.

Santa Muerte’s connection with the criminal Underworld was the reason why the Mexican government formally condemned her. President Felipe Calderon stated that Santa Muerte was an “opponent of the Mexican State,” and due to that, in a move that would have been recognizable to the Inquisitors of the colonial era, they ordered the army to bulldoze dozens of her shrines in 2012.

Murder and Mayhem in the Saint’s Name

Some people think that the threat Santa Muerte poses goes far beyond a lack of understanding of Catholic dogma. According to the claims made by Gutierrez, “Santa Muerte is a demon represented under a different name, and there are many people who came to him as worshipers and users of this practice and found themselves bound to a demon or demonic tribe.”

On the other hand, for whom Santa Muerte represents a danger that is more physical than spiritual. There was even a case in 2012 when the Mexican police arrested Silvia Meraz due to his association with a series of murders that spanned three years.

Meraz and her supporters supposedly sacrificed three people, among whom there was a ten-year-old boy, at an altar of Santa Muerte. According to the prosecutors, these people sliced open the victims’ veins, and while they were still breathing, they waited for them to bleed to death and collected the blood in a container.  They used this blood to pour it around an idol of the skeleton saint.

Even though most people who respect Santa Muerte do not take things to this extreme, the incident has only fueled more warnings from the Catholic Church about the dangers that come as a result of glorifying death.

Santa Muerte: Symbol of hope for the masses

Despite the fact that the majority of people tend to evade discussions that are associated with death, illness, and grief, people from Mexico are different. As a result, Santa Muerte does not cause fear in Mexican society, although it is considered to be a personification of death.

For many years, Mexican society has celebrated the passing from life to death. Events such as Dead of the Dead have helped turn death from a terrifying phenomenon into a natural and embraced what is inevitable.

For many people in Mexico, Santa Muerte is not a representation of terror, but one of hope. Unlike any other culture that ignores Death, Mexican culture is as invested in death as in life, and they view it as a passage into another state of being, not as lights-out.

Thanks to these claims and values, Santa Muerte represents a figure that is rejoiced by many, and she is a tie to loved ones in the afterlife.

Moreover, Santa Muerte does not distinguish against minority groups and LGBTQ+ citizens in the way that certain, if not the majority, churches may. Since death ultimately comes for all people, Santa Muerte is viewed as an accepting symbol in what can often be a detestable world. Even if the saint is like a corpse and may has a terrifying appearance, yet she provides comfort for those who have nowhere else to turn.

The rivaling opinions of Santa Muerte 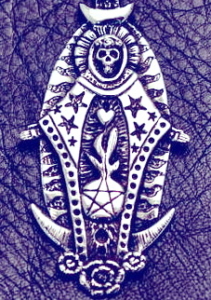 saint to many criminals, drug lords, and mobsters.

But the most important question is, why do these figures turn to Santa Muerte to pray for help in their crimes? Criminal activity can be dangerous, and praying to the saint of death herself can be a way for those engaging in illegal activities to feel at peace that they might enjoy safe travels.

Due to the fact that Catholicism is considered as the root of Mexican culture, asking God for help in their crimes can be too uncomfortable and even ironic for even the worst criminals. As a result, Santa Muerte is the ideal middle point between maintaining the religious dedication and engaging in ethically questionable activities.

Unfortunately, a large amount of the good that Santa Muerte stands for is overshadowed by the fact that some of her most faithful and devoted fans are involved in unlawful activities.

But despite that fact, this is a tattoo design that is gaining popularity in recent years. It a rich design with symbolism and history, and those may be the crucial reasons why people are choosing this motif.