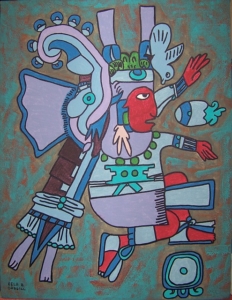 The Aztecs based a big part of their lives worshiping their gods.

This is a dual god and goddess who was the creator of the world. Ometecuhtli and Omecihuatl were considered dual gods and goddesses. He/she represented dualities in the natural world and life, such as male and female, good and evil, love and hate, chaos, and order. He/she created themselves out of the void and then had children, four children. Their children created the directions North, South, East, and West and then went on to create the world. He/she is usually represented with ears of corn, adorning him/her to represent the Earth’s fertility. Corn was considered one of the main crops in Aztec culture.

Among the Aztec Gods of the Sun were:

Another son of Ometecuhtli/Omecihual, Zuetzalcoati, took over as Lord of the Sun when he knocked Tezcatlipoca out of the sky. His name means feathered serpent or dragon. His symbol is a conch shell that was cut in half and worn on the chest. The design of the conch shell represents the wind. A powerful wind blows in a spiral motion in hurricanes or tornadoes. Quetzalcoatl was represented by rattlesnakes, resplendent quetzals, crows, and macaws. He is also represented by ducks, spider monkeys, and the harpy eagle. He created the boundary between the sky and the Earth. He created a new civilization after Tezcatlipoca destroyed the first one. This civilization did not honor the gods, so Tezcatlipoca turned them into monkeys. Quetzalcoatl blew all the monkeys off of the Earth. He then gave up being the Sun God in order to repopulate Earth.

The third god of the Sun was Tlaloc, who was the god of fertility, rain, and water. He could be benevolent or unmerciful. He either gave life or took it away by blessing the Earth with rain or hurtling thunderbolts or hail down from the sky. Tlaloc’s animal forms were shellfish, amphibians, snails, and herons. He lived in an active volcano, now known as Mount Tlaloc. Tlaloc is depicted with fangs and protruding eyes. He is usually holding water, lighting, or corn. The four Tlalocs mark the four corners of the universe and control time. Tlaloc was married to Xochiquetzal, who was the goddess of corn, sex, and flowers. Tezcatlipoca seduced her away from Tlaloc, and Tlaloc was depressed. He refused to make it rain, and there was a drought on Earth. The people prayed to him, but he did not listen to their prayers. Finally, he had enough of the people begging him to help them. Tlaloc made it rain fire and destroyed the Earth.

Chalchiuhtlicue was the goddess of baptisms, streams, water, rivers, storms, and seas. She protected women and children and made the crops fertile. She was Tlaloc’s second wife. She was the fourth Sun, and she was a benevolent ruler who loved the Earth and the people. Tezcatlipoca spread the rumor that Chalchiuhtlicue was faking her kindness and loyalty to her people. He said that she just wanted the people to worship her, and she did not care about them. This broke Chalchiuhtlicue’s heart, and she wept for 52 years. Her tears caused a flood that wiped out the life on the Earth.

Nahuatl was considered to be a god that was covered in sores. He was a humble God who cared for everyone. Most often, Nanahuatl is depicted as a god emerging from flames. When the gods needed to pick the fifth Sun, they chose Nanahuatl and Tonatiuh to become the moon and the Sun. Because Nahuatl gave a blood sacrifice to the gods and practiced penance before sacrificing himself to the flame to become the moon, the gods made him the Sun.

Tonatiuh (Aztec Symbol of the present and war)

Tonatiuh was the son of Chalchiuhtlicue and Tlaloc. He was chosen to be the fifth Sun, but when it came time for him to jump into the fire, he could not. Nahuatl jumped into the flames, which embarrassed Tonatiuh. He quickly followed, and they created two suns. However, the gods were angry with Tonatiuh, and they threw a rabbit at him, causing him to lose his luster. Then he became the moon forever chasing Nanahuatl across the sky. In other cultures, he becomes a sun god who was fierce and waged war on the underworld each night.

Huitzilopochtli was a son of Ometecuhtli/Omecihuatl and was considered the primary god of war in the Aztec culture. He carried the fire serpent, and that made him a symbol of fire. Because he was so powerful and strong, he became the fifth Sun. The stars, or Tzizimimeh, were jealous of Huitzilopochtli and chased him across the night sky, thus creating the days and nights. The Aztecs would offer him blood sacrifices to help him in his continuous battle to keep the Earth intact. The Aztecs believed that if they did not appease their gods with sacrifices, the fifth Sun would turn black, and the world would be destroyed.