The Leviathan Cross is a symbol that is sometimes used in occult and satanic practices. Additionally, it is known as the “crux ansata,” which is Latin for “cross with a handle.” The symbol is typically depicted as a cross with a circle or loop attached to the top. The history of the Leviathan Cross is mystical and unclear, as it is a relatively modern symbol that has not been widely documented. The Leviathan is a mythical sea creature mentioned in the Hebrew Bible and has been the subject of many myths and legends throughout history. 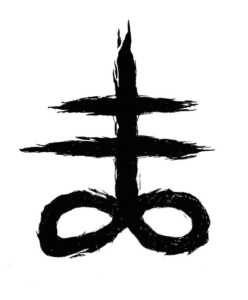 On the other hand, the symbol of the cross has a long and well-documented history dating back to ancient times. It has been widely used as a symbol of Christianity for centuries and is often associated with themes of sacrifice, redemption, and salvation. It needs to be clarified precisely when the two characters were combined to form the Leviathan Cross. Still, likely, the symbol arose more recently to combine the symbolic significance of the cross with the mythical power of the Leviathan.

The Leviathan Cross Meanings And Symbolism

The meaning and symbolism of the Leviathan Cross may vary among different individuals and groups. Some may see it as a powerful symbol of spiritual transformation, while others may view it as a symbol of chaos and destruction. As with any symbol, the meaning and significance of the Leviathan Cross largely depend on the context in which it is used and the interpretation of the individual or group using it.
The Leviathan Cross is a symbol that is sometimes used in tattoo art, particularly in designs inspired by occult or satanic themes. The symbol is typically depicted as a cross with a circle or loop attached to the top. It is often associated (as I said before) with chaos, primal forces, and the element of water.

This design can be made of a cross with a snake or dragon wrapped around it. The Leviathan is a mythical sea creature sometimes depicted as a giant snake or dragon. He’s mentioned in the Hebrew Bible and is described as a fearsome and powerful creature that dwells in the sea. In some traditions, the Leviathan is associated with chaos and destruction and is seen as a symbol of the natural world’s power. In other traditions, the Leviathan is seen as a guardian of the seas and is revered as a powerful and benevolent force. The Leviathan has been the subject of many stories and legends throughout history and has been depicted in various works of art, literature, and film.

The Leviathan Cross is sometimes associated with overcoming obstacles or challenges, as the Leviathan was seen as a formidable and fearsome beast. Some people may choose to get a Leviathan Cross tattoo to symbolize their strength and resilience or to represent their belief in their ability to overcome adversity. The cross itself is a symbol of Christianity and is often associated with themes of sacrifice, redemption, and salvation. When combined with the symbol of the Leviathan, the cross may take on additional meanings related to the power of faith and the ability to overcome challenges through spiritual strength.

Leviathan Cross tattoos may be chosen by individuals interested in occult or satanic practices or drawn to the symbol’s associations with power and spiritual transformation. Others may be tempted to the tattoo because of its mythical or symbolic significance or because they find the design aesthetically appealing. However, it is necessary to note that the Leviathan Cross is not a widely recognized or understood symbol and may be viewed as controversial by some people.

Suppose you are considering getting a Leviathan Cross tattoo. In that case, it is essential to carefully consider the potential meanings and associations of the symbol, as well as any possible consequences of displaying it on your body. It is worth noting that tattoos are a permanent form of body modification, and it is essential to carefully consider the design and placement of a tattoo before getting one. It would be best if you also chose a reputable and skilled tattoo artist who is familiar with the design and can help you to understand any potential risks or considerations. In conclusion, this is a symbol with a complex and mysterious history that is often associated with occult and satanic practices.