We know for a fact that the snake is a very intriguing and famous animal, important in different cultures and religions. Typically there is a whole range of possibilities, combinations, and designs to choose from if you are keen on a snake tattoo design.

Many indigenous society records in their history and culture were using a unique set of tribal patterns. The patterns have special meaning and are usually connected with the spiritual world and the elements of nature from that region. Snakes are one of the oldest religious symbols in our history. From the Germanic tribes of ancient Europe to the Native 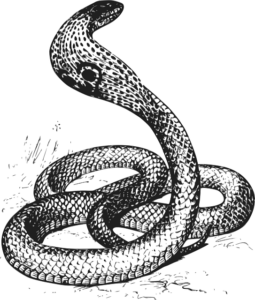 Americans on the Midwest plains, numerous cultures across the globe have associated these fantastic creatures with countless deities and local folklore characters. As a strong spiritual connection with your indigenous heritage, tribal snake tattoos are a great way to express your thoughts to the world.

The Snake represents sexual passion and temptation, whereas the eagle is an animal reserved for only the noblest and morally upstanding personas. The two animals contrast each other, so an eagle and snake tattoo design represents the conflict between our honorable objectives and our wild, sometimes cruel nature. It is an expression of the battle between doing what is right versus what is morally reprehensible, the war between good and evil. In most design variations, good is triumphant, and the eagle is usually seen as the victor.

These fatal animals were once held in high admiration by the Aztecs, the Mayans, and other peoples of Central America. The importance of these animals in North American history can’t be overstated. When the American colonists accepted the famous Gadsden Flag with the historic symbol of a rattlesnake and the phrase Don’t Tread on Me, the image of the venomous rattlesnake as a symbol or mascot for the underdogs struck a nerve for many, especially those across the Atlantic. Benjamin Franklin created a famous engraving in which he urged various fragile, young American colonies to rise and fight against the British. In 1751, he suggested that as a gratitude for the British policy of sending convicted criminals to America, the Americans should send barrels filled with rattlesnakes to the king’s address. Since then, a rattlesnake has come to demonstrate the hidden might and unconquerable spirit of the Underdog.

A coiled snake is a deadly creature equipped and prepared to unleash its wrath at any moment. It is a sign that calm appearances can be deceptive since, under that cool surface, the Snake is ready to strike in a split second. The tattoo of a coiled snake shows the world that you have a deadly persona lurking underneath your seemingly composed and collected exterior.

You have probably asked yourself why the universal symbol for healing and medicine is composed of two things (daggers and snakes) that can kill you. Known as the Caduceus, the illustration represents the staff of Asclepius, the Greek god of Medicine and Healing. Snakes have been associated with pagan symbols of rebirth and fertility, so this design has the lofty position of being known worldwide as a renewal and transformation.

Roses are considered to be the ultimate symbols of love, affection, and beauty. As a manifestation given to a fair lady to woo her heart, a rose signifies femininity’s pure, chaste nature. But what is the exact symbolism of a rose and snake tattoo? Such tattoo design indicates the loss of the innocence and beauty of a delicate flower at the hands of an intoxicatingly evil trickster. In addition, a rose and snake tattoo is a tip of the hat to the temptation of Eve in the Garden of Eden.

It isn’t exceptional for dragon and snake tattoos to explain the Yin Yang symbol of harmony and balance. Dragons are Yang, the wild, brave, passionate, and often fiery Sun character that tends to have a definitively manly or masculine aspect. On the other hand, snakes illustrate our Yin, the moon’s calm, cunning, rational nature. Dragons act while Snakes think, and both together, they perfectly adjust and balance each other in the dance of Life.

Skulls are the personification of death and decay, a grim reminder of our mortality. The meaning that you obtain from a skull and snake tattoo depends heavily on your cultural context. In Western societies, both images mean the complete physical and spiritual destruction of another being. The image symbolizes utter deterioration and death at the hands of a feared critter. However, in some cultures, a snake is the expression of healing and rebirth. When combined with a symbol of mortality like a human skull, the image represents the cycle of death and resurrection, similar to the meaning of the Ouroboros.

In its modern manifestations, the term snake eyes have been batted around bars and pool halls since the Roaring Twenties, but we can trace its roots to ancient Rome. Back then, throwing snake eyes was also known as a dog’s throw and can symbolize good or evil depending on the situation. Today, snake eyes are commonly linked to betrayal, and a snake eyes tattoo design is a tip of the hat to your inner scoundrel and devious trickster.