To move fast as a snail is to move with some deliberation and to move very slowly. The snail represents the slow and steady symbol of nature, an animal that slowly but surely gets to its destination. In its behavior, the snail symbolizes unhurriedness, and it can also be associated with self-sufficiency, as it carries its spiral house on its back. The snail’s shells are typically spiral. Spirals symbolize the expanding or you’re conscious, and they can also imply a process of looking within for answers (to seek inner consciousness for answers).

Snail as a tattoo idea can represent awareness, and an ability to interpret dreams and different realities effectively. This is because the snail’s antennae are “radar antennas.” The entire body of the snail is a sensory or sonic tool. According to that, it is a symbol of experiencing reality via different sensory perceptions.

The snail is also a lunar creature. Aboriginal cultures observed the snail’s ability to hide within its shell or reveal itself like a behavior that is likened to the waxing and waning of the moon (revealing and concealing). Very similar, the snail shares themes of progress, cycles, and fertility with the moon too.

The symbolic meaning of the snail:

Meanings of the snail tattoo:

When a person thinks about a tattoo, he wants to get a unique one, emphasizing his personality. It is thought that the image on the body affects life and can radically change it. Therefore, the selection of a picture is necessary not only in appearance but also in symbolism. Snail tattoos are rare, unlike other symbols and inscriptions. The image is interesting; however, the meaning of snail tattoo is quite contradictory. Usually, it is associated with the properties of the mollusk.

Snails are seen as tiny and slow, creatures that live a slow life and rush for nothing and nobody. In the Christian religion, the deadly sin of ‘sloth’ was often represented by a snail. However, snails have much more significant meanings in other cultures. For instance, the Aztecs correlated the snail with the moon, rebirth, and the cycle of life; in fact, the moon god Tecciztecatl was dressed in a snail shell on his shoulders. In Ancient Greece, they were used in agriculture, a snail climbing a stalk showed the time of harvest.

These tattoos are not the only symbol of laziness and deliberation, but instead, they can be a symbol of rebirth, death, and even self-sufficiency, they also look pretty cool. The best designs of a snail tattoo are done in a strong and vivid traditional old school style that captures the quirky beauty of this sluggish creature and turns it into some sweet body art.

For whom are the snail tattoo designs suitable? 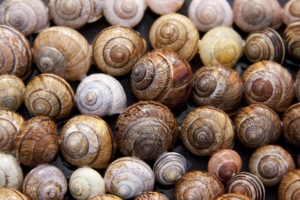 Snail tattoos are considered to be universal. They are not divided into gender since they are excellent for both men and women and fit any age category. The person with the image of a snail on the body most likely has the following qualities:

As for where to put it, most often, an ankle or an arm is chosen, but other parts of the body are also convenient.

Designs of a snail tattoo show what space for imagination gives considering such a choice. For instance, you can choose a real mollusk for the image, which in nature is a great variety, or you can portray a fantasy character. Any paint is suitable for drawing this design. In addition to the snail itself, you can depict nature, books, or create your own story, thus emphasizing the uniqueness and the ingenuity of your personality.