There have been lots of diverse cultures that lived in different parts of the world and some very captivating symbols that just by looking at them, you might not understand what they stand for. This kind of symbols makes people wonder about their special meaning. This is especially true when it comes to the symbol of the Triskele. Moreover, people are even more curious when they see this symbol tattooed on someone’s body.

The Triskele happens to be a symbol that will have people asking you what it means, which makes this tattoo a common choice for many people. This is a great thing for a tattoo since when you choose a design that looks like the Triskele, and when you realize what this tattoo design represents, you will begin to understand why it is so popular choice for a tattoo.

History of the Triskele

The Triskele, also known as the spiral of life, has been seen in many early cultures. Its first appearance was in the 4400 to 3600 BC mark by Malta. It was also found on the tomb of Newgrange in Ireland, which was built in 3200 BC, in the astronomical calendar. This symbol also appears to be an emblem that is heraldic and placed on the shields of warriors and found on the pottery created by the Greeks.

Most often, there is a Celtic origin attached to the Triskele even though the word comes from the Greek word “Triskeles,” which means three legs. Nevertheless, the claim that this symbol has Celtic origin has some truth in it. Lots of people used this symbol during the Tene or the second Iron Age, and this is one of the supports of the claim. Moreover, the symbol is imprinted all over the place, including a big rock at the entry of Newgrange.

There was some time when the symbol disappeared for many years until it made a resurgence in the 6th century when it was identified in Merovingian art. However, it soon left the central position of symbols being used except for those that lived in Ireland, where the symbol is still part of many illuminations and monuments. In the late 19th century, the Triskele was a popular druidic symbol. It was again rediscovered in national journals in 1914 in Britain and was used as the Breton National party symbol in 1940. There is still an official use of the Triskele in Ireland and is a common symbol in Celtic music as well.

Across the world, there are lots of interpretations of what the symbolism of the Triskele is. It is believed that it is hard to determine the definition of the Triskele, and below are some of the attempts of that.

First of all, the coiled, rotating parts of the Triskele or branches represent movement, eagerness, and energy in opposition to all that is fixed and right. It can also be used as a symbol of life.

In Celtic mythology, the Triskele is considered to be a symbol of the three points of movement for the sun, which include sunrise, then zenith, and finally, sunset. In other Celtic lore, this design is a representation of the pantheon of gods. It is threefold and signifies Ogme, Daghda, and Lugh. The three sections of the Triskele symbolize these. The triskele symbol is also said to symbolize the only goddess and all three of her beings, which include wife, mother, and daughter.

According to other cultures, the Triskele as a tattoo symbolizes the passage of time. In this sense, the Triskele represents the past, the present, and the future or the three different parts of life that all humans go through childhood, maturity, and being elders. 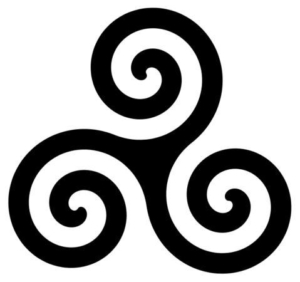 With this being said, we can say that the meaning behind the Triskele revolves around the idea of life and how we embrace it. Whether it symbolizes the stages of life or the different worlds we experience in our existence, it truly will be up to the person who is going to wear the tattoo.

There is only one design of this tattoo that all people are familiar with. However, it is possible for people to include other symbols to their tattoo, or the Triskele might be the central part of a larger tattoo that could incorporate other symbols from the cultures that this design has influenced.

Triskele with other Celtic Symbols

The Triskele looks perfectly in combination with a Celtic themed piece. No matter whether the design includes the cross, the green man, the harp, or the shamrock, the Triskele fits right in with it. If you want to symbolize your Irish heritage, this motif would be a good addition to a full Celtic piece.

This tattoo design represents a perfect combination between style and symbols that go perfectly together as the Triskele is often tattooed in dark, bold lines. This is the reason why this design flows right along with most tribal tattoos. Thanks to the history of this symbol, it also fits in terms of cultural and historical value.

No matter what are your reasons for getting the triskele tattoo, they are good reasons since nobody can influence you what kind of tattoo you should get. Just be sure you are satisfied with your choice of the tattoo artist and make sure they are well versed in dark tattooing.