The most considerable symbolism and meanings behind this XXIII tattoo design is its correlation with a verse from the bible. This verse is taken from Isaiah 41:13, suggesting that in time of need for help, you shouldn’t be afraid because God will lend out a hand to help you. Due to how powerful this statement is, it’s not a surprise that so many people decide to get the Roman numerals that are included with this verse tattooed on their bodies. Over and over again, we as humans forget about how important it is to think about other’s feelings or the fact that we as humans are supposed to help each other out and not ignoring one another in times of need or challenging and stressful situations. This tattoo is a perfect reminder that you, too, can fall victim to circumstances that are not within our power. This tattoo also serves as a reminder that you should help others as much as possible since you never know when and if you are going to be in a similar situation. The Roman numerals linked to the verse from Isaiah reveal strong character in yourself, describing you as a firm but a gentle human being that is out there to help others along your spiritual path of life. 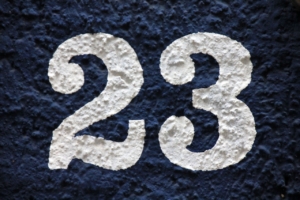 When we talk about the style and design of the image of the XXIII tattoo, we can say that it is pretty straight up. Because this tattoo includes Roman numerals, the XXIII image itself is simple enough that it can be tattooed almost anywhere on your body. One of the essential key components of having this tattoo is keeping the numerals allied, since you don’t want too much blank space between the numerals and to be off-center from each other. Another thing you should think about is choosing a font for the numerals. The classic style of Roman numerals is probably the best because, in this way, it is the easiest to detect what the tattoo is. Most often, to illustrate this image, dark, thick lines and ink are being used.

This design is so simple, which allows it to fit in even in the smallest parts of the body. The most popular paces for this tattoo to be inked are the wrists, the forearms, the chest, and the back of the neck. Depending on if you wish your tattoo to be seen by other people or not, this is an easy tattoo to cover if you need it to be. Also, depending on the size you choose for this tattoo or whether or not you are going to combine it with an image, you will have to find an area on your body where everything is going to fit perfectly.

If the simple Roman numerals are not enough for you or you wish to combine the numerals with an image to make the meaning of the XXIII tattoo clearer without having to explain it, you need to find the perfect image that goes along well with the message of the verse. This is always a great and unique idea that will make your tattoo one of a kind.

Doves And The Number XXIII

The image of the dove is an image that is usually related to religious beliefs and also gives a sense of being set free. The combination of this image of a dove with the Roman numerals set to the side or next to the bird can provide a lot of imagery to your tattoo. It will also add to the symbolism of the “XXIII” tattoo.

Cross And The Number XXIII

Because this is an image connected to religious beliefs, an additional way to demonstrate this is to have the design of a cross by the Roman numerals. This suggests that the Roman numerals are connected to a verse or prayer. Because the cross is possibly one of the most recognizable objects given that it is the device Christ was put upon to die, it correlates with the idea of the verse. It proves that you are prepared to sacrifice something significant and precious to you just to help others get through the dark times they may be suffering from. This is a genuine way of showing and telling others you are a divine person with an ethical, moral compass, constantly trying to lend a hand to others in need.